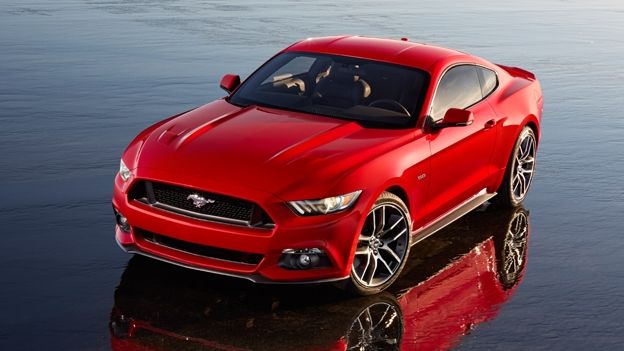 The Ford Mustang has been in production for nearly 50 years but never before has a version been built specifically for Europe, that's all about to change

Ford has unveiled the new Ford Mustang 2015, the first Mustang ever that will be heading to the UK with right-hand drive. It's also the company's most tech-heavy Mustang yet featuring an 8-inch touchscreen and full Ford SYNC voice control.

The new Mustang 2015 will be the first Mustang to be built in both left-hand drive and also as a new right-hand drive UK/European variant.

An all-new sleek design has been adopted whilst still retaining all the classic styling cues that make it most certainly a traditional Mustang. Look past the design and you'll realise that this is the most futuristic Mustang ever built.

There's also a smaller 4.3-inch LCD central display behind the wheel which will show essential navigation info and even performance data using TrackApps which will show G-Force, lap times and more. For those that prefer road trips or just cruising there's also the option of a premium 12-speaker sound system.

Of course it wouldn't be a Mustang without an enormous engine and yes, the 2015 Mustang does offer the choice of having that classic 5-litre V8 which throws out a massive 426PS and over 529Nm of torque.

For those that want something a little different though Ford will also offer the new Mustang with a more environmentally-friendly 2.3-litre EcoBoost engine that brings with it a state-of-the-art turbocharger and a still impressive 309PS and 407Nm of torque.

Whatever the choice the tech doesn't stop there with the GT model getting performance brakes whilst all Mustangs will come with a range of toggles which can quickly adjust engine response, steering effort and ESP settings.

Finally Ford hasn't forgotten those who live the 'real' driving experience, the GT manual transmission will come with launch control letting you hit those goosebump-inducing starts every time.

So when can you buy it? Well unfortunately us UK customers are in for a wait as the Mustang UK variant won't arrive until early 2015 and there's no word on pricing but considering how much the US version costs expect something equally as competitive in the UK.