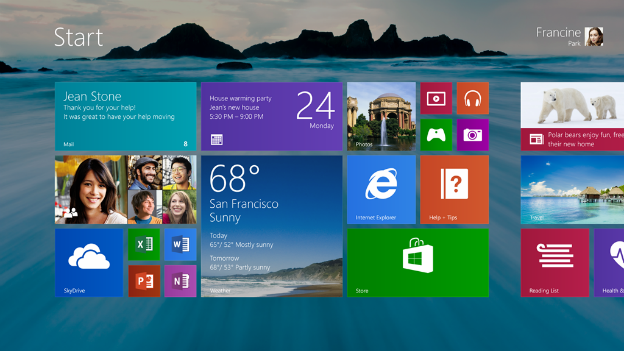 Microsoft has revealed plenty of details about the Windows 8.1 upgrade in a blog post this afternoon - including the return of the Start button

A blog post from Microsoft has spilled the goods on what we can expect from the first proper update of Windows 8 since the OS was first revealed last year.

Perhaps the most important point is the (sort-of) return of the Microsoft Start button. Instead of reinstating the Windows 7 Start button on the desktop though, Microsoft has opted to put what it calls a "tip" in the taskbar that'll guide you back to the tiled Start screen.

"We've improved the way you navigate to Start with the mouse by changing the Start “tip” to be the familiar Windows logo," says Antoine Leblond,
corporate vice president for Windows Program Management in a blog post on the Windows site.

"The new tip appears anytime you move the mouse to the bottom left corner of the screen, and is always visible on the taskbar when on the desktop," he says.

So, while not a complete U-turn, Microsoft has recognised the criticism that was levelled at Windows 8 for dropping the feature - the first time it's been left out of a Windows OS since Windows 95.

But, that's just scratching the surface. Microsoft has gone into plenty of detail about it's new upgrade and most of them seem like pretty solid moves in our opinion.

Predictably, the Start screen has been a lot of attention. You can now set a personalised Start screen background as well as change the size of the tiles - either large or small - depending on your wants. Just like on Windows Phone 8, you can also rearrange the tiles to your liking.

New apps will automatically download to an apps folder, where you can choose to pin them to the Start screen or just leave them in the folder.

While we're on the subject of apps - they've been improved too. So the Photos app now has some extra editing features thrown in and the Music app has been redesigned to supposedly make it easier to navigate your music library.

Some attention has also been lavished on multitasking - following the Windows Snap maneuver that we saw shown off with the Xbox One reveal.

"Windows 8.1 brings variable, continuous size of snap views. You will have more ways to see multiple apps on the screen at the same time."

"You can resize apps to any size you want, share the screen between two apps, or have up to three apps on each screen if you have a multiple displays connected, you can have different Windows Store apps running on all the displays at the same time and the Start Screen can stay open on one monitor."

Interacting with the operating system has been improved with PC Settings now giving you access to all the settings without having to go into the Control Panel on the desktop.

Lastly, Microsoft has turned to IE and SkyDrive to improve its online offerings somewhat. Microsoft says that the new SkyDrive app will now give you access to all your files even when offline.

It also says that the latest Internet Explorer - IE11 - will come with Windows 8.1 and has been designed (like much of the OS) with touch firmly in mind. You can also now adjust the browser to always show the address bar and have as many open tabs as you want.

There's also plenty more to come, as Leblond makes clear in his blog post: "These are just some of the updates coming in Windows 8.1. We'll be blogging more about these and other changes in the coming weeks."

"As you've heard us talk about before, Windows 8.1 will be available later this year as a free update for consumers to Windows 8 through the Windows Store the same way customers get app updates today."

A preview version of the Windows 8.1 upgrade will be released on June 26th at Build - Microsoft's developers conference - giving an early taster of the new-look OS.

If you've not used Windows 8 properly yet, then you can get an idea of what it's like with our in-depth review. For more information on the Windows 8.1 upgrade, check out Leblond's post on Microsoft's official blog.