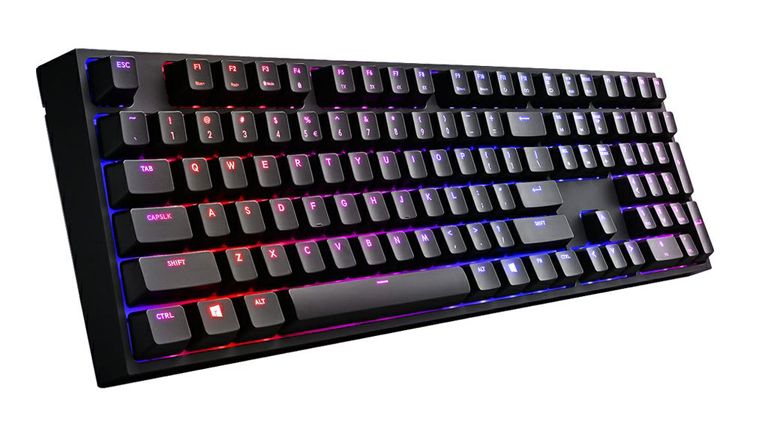 Make no mistake about it, the Quick Fire XTi from Cooler Master is one hell of a keyboard. From our testing here at T3.com we're convinced that this keyboard would survive the apocalypse, as the build quality is simply insane. We'll get to the specifics in a minute, however if you just want a quick take away, then consider this our recommendation - if you want a premium, minimalist gaming keyboard and don't mind paying for it then the XTi is a superb choice. For those who want the detail, read on below.

Let's start off with the packaging and its contents. The Quick Fire comes in a black, swing-door, top access cardboard box. Open the box's lid and you are presented with the black fabric case that doubles up as a dust cover. Within the case lies the XTi. To the rear of the box, a discrete compartment hides the keyboard's braided Micro USB power cable, wire key pulling tool and a plastic replacement CTRL-sized Cooler Master-branded key. Beneath the keyboard lies the XTi's minimalist manual.

In terms of raw specs, the Quick Fire keyboard is outfitted with 100 per cent brown Cherry MX switches, which have an actuation force of 45 cN (centinewton) and are among the quietest, non-clicky mechanical switches on the market. These switches are stated to have a 50 million stroke lifespan. Sitting on top of them are UV coated keys. The keyboard also has dual blue and red LED backlighting, which can be combined to deliver 35 different colours per key. There are also multiple different pre-set lighting modes, four programmable profiles and the ability to set customisable macros. The keyboard measures in at 43.9x13x4.1 cm and weighs 1114 g.

Interestingly, the XTi comes with absolutely zero ports, with the only opening being for its power cable (which can be routed out the back, left or right in channels cut in its base).

Absolutely zero ports means that, while you can't connect loads of stuff to the keyboard, it retains a sleek and minimalist appearance.

The first thing you notice with the Quick Fire XTi is that it's a seriously solid unit. That high weight really adds a quality, well built feel to the keyboard during use which, when combined with some really resistant rubber pads, means there is absolutely zero unwanted movement on the desk. You feel that if you did survive the apocalypse, you could not only keep using this to post on the T3.com Facebook page, but also as a weapon to beat back irradiated mutants. The board is simply a pleasure to type on too, making prolonged periods of typing or strafing hassle free.

We really liked the complete lack of any branding on the keyboard too, with the only evidence that it is a Cooler Master product tucked away on the base. The lighting systems were very wizzy and, dare we say, almost a little gimmicky, but with the Quick Fire's minimalist appearance here at T3.com we actually liked the XTi best with all lights turned off. It looked understated in a really professional way.

There are various stock lighting modes out of the box.

You should buy this if…

The phrase 'Cherry MX switches' means something to you.

You shouldn't buy this if…

You don't do a lot of PC gaming or long-haul typing. You're brassing it.

What would we change if we could

Add a cleaning cloth to the package to wipe away finger residue, as the UV coated keys soon accrue detritus.

Here at T3.com we liked the Quick Fire best with all lights turned off - understated and classy.

We test a lot of gaming keyboards here at T3.com, however the XTi almost came completely out of left field for us. Glancing at the box you'd be forgiven for passing over the Quick Fire, as its minimalist, non-shouty appearance would probably be lost among competitors. At the end of the day though, it was this commitment to minimalism and sleekness almost as much as the very high build quality that won us over. The Quick Fire XTi is an excellent choice at a premium price.