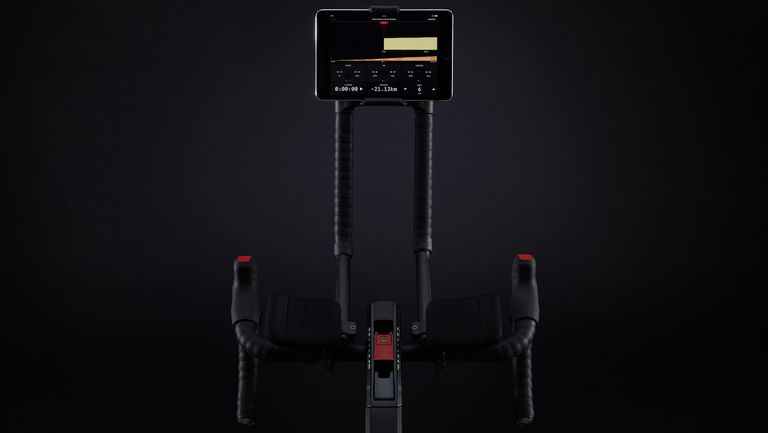 Wattbike has long been ahead of the curve when it comes to giving cycling nerds what they want – chiefly the sort of cold, hard stats that big-legged nutters can pore over after an intense workout. Its bikes are aimed at those who find something like a Wahoo KICKR turbo trainer is not quite hardcore enough for them (or who don't want to go to the effort of removing their road bike's wheels and clamping it into a turbo trainer).

Wattbike's infamous Pro Trainer can be found in gyms up and down the country and its innovative use of air and magnets in the resistance system develops a large enough output to trouble even the toughest athletes.

But more than that, the Wattbike has been carefully engineered and independently tested to deliver ±2% accuracy across the full power range of 0-3760W, displayed on its tiny data screens.

Given that cycling is often about maintaining power outputs and testing the threshold limits, knowing this sort of information is key to anyone looking to move their pedalling game along.

The Wattbike Atom takes all of this knowledge and distils it down to a much quieter, neater and more desirable project that just so happens to easily fit inside even the smallest homes.

With 22 gears, ultra-realistic racing handlebars and full connectivity with the most popular virtual training simulator software, the Atom makes a mighty fine indoor cycling proposition. Is it worth the £1,599 asking price? If you want to really train hard, maybe so. I've just spent a week riding one hard, so let's find out…

There's no denying, the Atom is a mighty fine slice of design. Its beautifully welded aluminium frame, sharp angles and realistic finishing kit make it look like a Michael Bay Transformers interpretation of a carbon road bike.

The adjustable saddle is a neat, contrasting slither of aluminium, the cockpit consists of standard drop bars, as well as time trial handles with elbow rests, while electronic resistance adjustment is taken care of via neat rubber shifters housed in the handlebar grips.

At 44kg, its no lightweight, although wheeling it around the room is made easier by a small set of transportation rollers. In general, this is one piece of kit you'll happily just leave set up in the corner of the room. It's also definitely nicer to look at than an old bike attached to a turbo trainer.

The extended time trial bars also have a place to clip a tablet or smartphone, which will please those looking to spend long, arduous sessions pounding the virtual tarmac of Zwift et al.

No matter how much you spend on a turbo trainer, there's just something about the flywheel/roller set-up that constantly reminds the rider that they are, in fact, pedalling on a road to nowhere.

The Atom is one of the first indoor trainers to offer the same kind of pedal fluidity found on very expensive road bikes and, for that reason alone, it's a joy to spend lots of time on.

It also has every conceivable sensor built into its design, meaning it hooks up with all major third party training software and delivers accurate data on speed, cadence, power output and much more, with individual crank analysis for the mega nerds out there – this lets you see the terrifying disparity between the power applied by your dominant leg, and the piffling amount added by your freeloading other leg.

Thankfully, the Atom is also much quieter than the fan-assisted Wattbike units found in gyms, with its clever magnetic resistance system emitting little more than a muted whir.

Hook the Atom up to Zwift, which I did for the duration of this test, and it syncs with the system's clever ERG mode, meaning you don't have to touch the resistance during a training session.

The Atom will automatically adjust its resistance to meet a required wattage output or will cleverly make pedalling harder on the legs if your little avatar is crawling up a hill, for example.

Switch over to manual mode and the rubber shifters located on top of the handlebars do an okay job of cycling through the Atom's 22 gears, like a real bike. However, if there is one area that lets the Atom down, it's the relatively slow gearshift response times. Sprinters will really feel this, as dropping a few gears and then piling the power through the cranks can sometimes be a messy, unsynchronised affair. Wattbike is always updating its operating system to make improvements so it's possible this situation will get better in time.

Above all else, the bike feels extremely stable, even under heavy power loads, while the frame and important parts are sealed away from perspiration downpours. There's nothing worse than watching one of your favourite bikes disintegrate beneath you as you sweat all over it on a turbo trainer.

Due to the lofty asking price of this product, only the most ardent indoor training fanatics are likely to plump for it over a 'smart' £400 turbo trainer, but that hefty chunk of change feels like it buys a lot.

The Atom feels much sturdier than any home turbo set-up we've tried and that includes the full Wahoo K.O.M set-up. Although this doesn't deliver the simulated climbing technology offered by Wahoo, the experience feels far more realistic overall.

Perhaps some of the most nuanced cyclists will bemoan the sluggish manual gear changes and it's sometimes slow resistance changes with certain training apps, but these issues are not deal breakers, for me.

There's also something very nice about having a dedicated set-up in the corner of your room that looks good and is quickly and easily adjusted to suit various users – no need to ruin your carbon road bike with this one.

Sure, Wattbike Atom is a niche product, but if you're a serious cyclist – or anyone who wants to get seriously fit – it's worth the asking price.