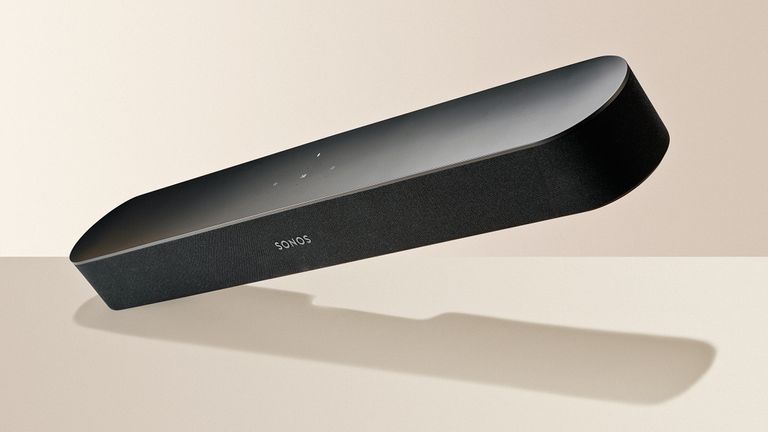 Arguably worth the price even if it was just a soundbar, Sonos Beam adds so many useful additional features that it becomes almost a no-brainer to at least consider a purchase. One day, all wireless home cinema speakers will be this versatile, this good…

Too long, can't be bothered to read? The Sonos Beam is a home cinema cousin to the mega successful Sonos One, adding the Amazon Alexa AI (and now Apple AirPlay 2) to Sonos' usual cunning blend of proprietary, multi-room streaming and support for about 9 billion streaming services from third parties. The result is a truly excellent, affordable soundbar with Amazon Alexa built in, and it's subsequently won Best Soundbar 2 years running at the T3 Awards.

The down side of TVs now being thinner than a Twiglet is that the sound they put out is not all that impressive. To get the most out of TV audio, something extra is required. And yet multi-speaker surround systems are not ideal for those who don’t live in a stately home or converted warehouse. That’s where soundbars come in… and Sonos Beam is a great soundbar.

Sonos already makes a soundbar– the Playbar – and a soundbase – the Playbase, logically enough. Beam is considerably lighter, smaller and cheaper than both, and in several key ways a better product.

The Beam is very much a home cinema equivalent to the Sonos One music speaker, which added Amazon Alexa and a more powerful and expandable underlying platform to the usual Sonos mix, and pitched it at an enticingly affordable price.

Beam is a short, narrow, off-white lozenge (there’s also a black one). It looks very smart, without being at all ostentatious or fussy. I'd say it'll easily sit in front of any TV on a stand or plinth of even the most negligible height without blocking the remote control infra-red receiver or the bottom of the screen.

There are touch controls on top for volume and to turn Alexa off, a mesh grill on the front and rounded ends. It's very pleasingly designed.

One key way it improves over the Playbar and Playbase is that as well as optical digital in, there's an HDMI input so you can send audio to it via your TV's ARC (audio return channel) output. The Play devices only had optical inputs, which I always find a bit more of a faff to set up, not least because optical digital is the most fragile connector ever invented, and the one on my telly broke ages ago, so I have to use bloody Blu-tac to hold the optical cables in place.

Beam has a processor powerful enough to act as a platform that can be updated and honed over time. As such, as well as AirPlay 2 – making its Sonos debut on the Beam – and Alexa it could, once the right deals are inked, support Google Home, Chromecast and streaming services and AI assistants as yet unknown, in the future.

Well, I know a lot of people who are 'into hi-fi' don't like Sonos, so look away now if you're that kind of person. I find their products generally sound very good for what they cost, and their signature sound – which admittedly is not quite the most nuanced – is always upfront, meaty, beaty, big and bouncy.

Applied to a soundbar, this works especially well, as movie soundtracks, sporting events and even a lot of TV shows these days, are hardly noted for their subtle and nuanced audio.

For sport and general live TV duties Beam does a very solid, standup job, adding useful volume and presence to the big match, or the latest reality show imbecile-fest.

However, it's when you whack on an Amazon Prime movie, or a Netflix Original, or a Blu-ray or DVD that the Beam earns its (relatively modest) entry price. It delivers a BIG, adrenaline-pumping boost to the audio, with good separation of dialogue and music/effects. Given its compact dimensions, it's not surprising that the bass doesn’t descend low enough to rattle the room, but it has real power. The sound stage is really, surprisingly wide, too.

There's no attempt to muddy the field with pseudo-surround effects here, and certainly nothing as fanciful as Dolby Atmos. However, Sonos is a maestro of up-selling and surround sound is one several things that they have, which you might like to buy to add to the Sonos Beam.

I happened to have a pair of Sonos Ones lying around – ahem – and using them as rear surrounds was quite an interesting experience. First up, the effect they give when working properly is very good. They're fairly easy to setup with Sonos' TrueTone system, and they fill out the sound very nicely, plus adding some rear effects.

The thing is, I did find that with some sources, the effect was rather 'subtle', to the point of being barely noticeable. That was the case with Netflix, for instance.

I eventually worked out that this was because I get Netflix off a streaming stick and my TV does not 'pass through' 5.1 sound. So it was only receiving a stereo feed, which it was trying to 'upscale' to 5.1 – and hence the effect, though not bad, wasn't as impressive as 'proper' Dolby surround.

This isn't Sonos' fault, but it is something you might need to be aware of. Most modern TVs do pass through 5.1 – by which I mean they take the 5.1 feed from your Roku, Apple TV, or whatever and then output it via their ARC HDMI and the optical audio outputs. But, turns out mine does not. Bummer.

On the other hand, anything that is coming from the TV itself – broadcasts in 5.1 via the aerial, built-in apps such as Netflix and the rest – should output perfectly happily in 5.1 on any TV. For Blu-ray, just for the purposes of testing the Beam and 2 Ones surround setup, I ended up plugging one HDMI output directly into the Beam and one into the TV, which is pretty ridiculous.

Also, if you have a lot of Blu-rays or downloads which use DTS audio or Atmos, you're out of luck unless you have a way to change it on the fly, because support is for Dolby Digital 5.1 only.

Anyway, I am pretty sure most people will just buy a Beam and use it on its own, and never even consider adding rear surrounds, so my last five paragraphs are largely redundant. I just wanted to share my troubles with you.

Used purely as a music speaker – via Sonos' own app, Tidal Hifi and Amazon Prime Music in my case – the Beam is again a really cracking performer, despite its compact size. That's especially true with the lossless files on Tidal Hifi, as you'd expect, but it's very adept, as all Sonos products are, at sucking the most out of compressed music formats of all types.

Alexa can be irritatingly quirky, limited and inconsistent, but there's no doubt that having her as a bonus feature here is going to be a big selling point for many people.  The Amazon AI acts just as it does on Amazon's own Echo devices, allowing voice control of Spotify and Amazon Prime Music as well as acting as a kitchen timer, weather and news reader, smart home control hub and the full range of Alexa 'Skills' (apps, basically) from third parties from Uber to Nest to 'Relaxing Feng Shui Sounds', whatever that may be.

Having Alexa front and centre, when you're watching TV is arguably the best place for it to be positioned. Even better, if you have a compatible Fire TV streaming device, Alexa can be a quite neat way to search through the vast quantity of content on the Fire app. Needless to say, this is considerably more satisfying to use with Amazon Prime Video than main rival Netflix when searching for things to watch – ask for a film on Amazon's service and it will start playing. On Netflix, it'll just take you to its landing page.

However, it's equally good on both for skipping back and forward, altering the volume, pausing while you make tea, and so on.

Sonos has done as good a job as you could ask when it comes to making Alexa able to hear you over the sound of music or movies. Say 'Alexa' and it issues a small blooping sound, and fades the audio right down – including on any speakers in other rooms you have connected to a Sonos multi-room system, which is a little annoying. It doesn't hear you every time, but it hears you often enough to not cause fury.

Sonos Beam: multi-room and other stuff

Beam is of course fully compatible with all other Sonos speakers for multi-room, and can be used with a very long list of streaming services – all the main ones, plus some extremely niche propositions. New for 2018, Sonos Beam (and Sonos One) get compatibility with Apple AirPlay for the first time, in the form of the upgraded, more mobile-friendly AirPlay 2.

Alas, this upgrade is not going to be fully implemented until the July 17 launch date, so I won't have anything to report on this until then.

The Sonos app, despite having a list of features as long as several very long arms, is reasonably unwieldy these days, after a stream of updates in recent years. Certain settings could be easier to access but what's great about it is that you can start playing music to your Sonos Beam in any way you like, whether that's asking Alexa to play Abba or The Specials on Spotify, and it will come up in the Sonos app as if you were playing it via Sonos' own system.

You could then make the next track in the play queue something that's on your phone, or via Tidal. It's not perfect but it's pleasingly seamless in the majority of cases.

I have been blown away by the Sonos Beam, really. Due to a quirk of timing, I've recently been using the likes of KEF's LS50 Wireless and Naim's Uniti Atom at my place as well and the Beam has been by no means disgraced by the comparison. Of course, it doesn't sound as good as those £2,000+ systems, but it's not been a depressing chore having to switch to Beam for the purposes of this review.

The compact size, attractive styling and simple setup – especially thanks to the addition of HDMI ARC support – make it very easy to welcome the Beam into your home; far more so than previous Sonos home cinema speakers.

The sonic display it puts on is truly impressive for the size, with both movies and music, and the Beam will also slot into a larger Sonos system if you decide to go down that path. Add Alexa for home automation, news and weather, plus voice control of music and, if you have a Fire TV, movies and more, plus AirPlay 2 for iPhone users and you have quite the deal. It's probably Sonos' best product ever.