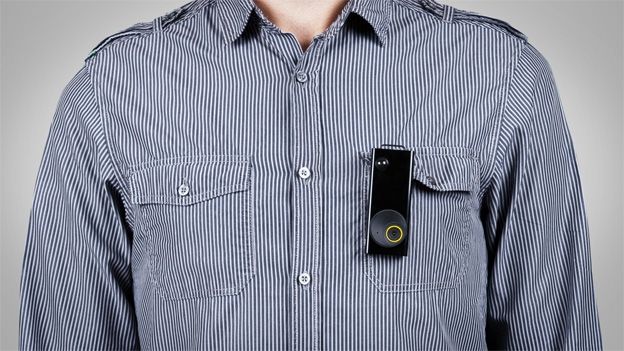 The OMG Life Autographer is a small clip-on gadget which shoots still images of your life – efforlessly. But does it do a good job?

You know how it is, you want to take a photograph of your best friend but something natural, not posed or awkward. So wouldn't it be good if the camera decided when a suitable shot arose and took it for you. That's part of the purpose of the OMG Life Autographer, a little black box that clips to your T-shirt or hangs on a lanyard round your neck.

The idea is you set it up, switch it on and forget about it, leaving the Autographer to do all the work for you. It's also meant to be like a Black Box recorder for your life. It's for still images only, not video.

The gadget is light enough to clip to your T-shirt pocket or neckline without pulling either down disastrously or without you noticing the weight. It's just 58g so significantly less than the lightest of smartphone. Size-wise it's unobtrusive, measuring 37.4 x 90 x 22.9mm.

It's a simple black-gloss oblong with a protruding lens on the front. You can close the lens aperture by turning the ring around it, revealing a yellow lens cap. Beyond that, and the motion sensor towards the top, the front of the Autographer is blank.

There's a clip on the back, a microUSB socket on one side and two buttons on the other. The top one is the menu button and the lower one which juts out a little is used to turn the machine on and off, among other things.

Its lightness means it doesn't feel overly solid or sturdy, but in everyday use it survived well. But we didn't drop it and it may not survive a fall from chest height on to concrete, say.

There's a lot of tech in this tiny case. There's the lens which is a wide-angle model – a fixed focus with 136 degrees field of view, giving a slight fish-eye look to the images which is quite pleasing.

An accelerometer senses how fast you're moving, and a colour sensor can spot light and brightness. Then there's a magnetometer which tells the gadget which way you're facing and a thermometer to calculate ambient temperature. Hmm.

The fifth sensor is that motion sensor mentioned above which works using infra-red like a home burglar alarm might. All these sensors work together to help it take the best photographs.

There's also a GPS unit built in so you can see where you took your shots and show this on a map. You can pair the gadget with your iPhone. Then, to check how it's doing, you can connect to it by Bluetooth and it'll stream what's on it to your phone's screen.

The point of the Autographer is that it takes images for you, instead of you constantly snapping – though of course you can carry a camera at the same time. You choose between low, medium and high frequency of image capture.

Roughly speaking, Autographer says low means 120 images per hour, medium is 240 per hour and high will give you 360 images an hour, which is one every 10 seconds. Additionally, you can initiate a sequence mode where the camera snaps nine images.

This is all very well, but the truth is the results are somewhat uneven. Wearing the Autographer means you often think to yourself “I hope it's taken a picture of that” and in our tests, it almost never had.

Additionally, the sequence mode, where you force the camera to shoot, is of limited value. We tried this out with our young canine friend.

If we throw a stick for her, she retrieves it and dances back towards us with a gaiety that is always a delight. Perfect, you'd think, for that sequence. But it takes around 10 seconds before the first shot and timing the throw was tricky to achieve more than one successful image.

There's also the issue of privacy. Autographer says it's best used among friends and certainly we found that when we spoke to people they all glanced at the gadget but, being British, never asked what it was or if we was filming.

If they had asked we'd only have been able to answer “we don't know.” But there are concerns here, as there are with other products such as Google Glass. For example, in day-to-day use, if you're wearing the Autographer then you have to remember to take it off when you go to the loo or a gym changing room.

The fish-eye effect of the images is attractive and means images work in a wide variety of situations. It's worth making sure the Autographer is hanging vertically or clipped on horizontally – when it's at a drunken angle the photos don't work as well. But the camera does a lot of work to make sure that what appears in the images is well-lit and focused.

The Autographer takes great images, so you don't have to. You can avoid that horrible distancing effect you get when you have a camera or camcorder in front of you. But the problem is it captures too few images, or the wrong moments.

Even with the Sequence setting to force it to shoot, it takes too long to take its first image and too long between shots. Going through images afterwards is mostly disappointing, though seeing where you were on a map is quite fun. But it's the odd image that stands out which almost makes it worthwhile, assuming your friends don't mind you shooting them all the time.

There's one more problem, though: the price. It's on sale for £399.99 and that just seems too high. This is a great idea in a pleasingly compact form. But at the moment it just feels too first-generation to be easily recommended just yet.