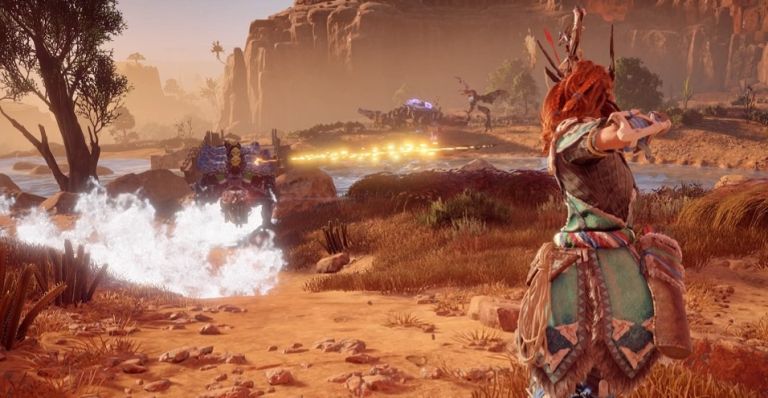 T3 reviews the latest first-party offering from Sony and Guerrilla Games, the studio behind the sci-fi shooter series, Killzone. But can Aloy and her robo dinosaurs do enough to knock Uncharted off the PS4 top spot?

We’re going one on one with a Thunderjaw.

A giant, T-rex-style robotic monster with machine guns for jaws, a razor sharp ax for a tail and a mine launcher on its back. We’ve just got a couple of bows and a mean look in our eyes.

We use our special ropecaster to tie it down briefly, relying on the brute strength of our hardpoint arrows to strip away its armour and those deadly ranged weapons. It breaks free, flinging NPCs around like toys. It’s clearly not going down without a fight. We shoot off the mine launcher. Then the tail. We keep dodging, loosing arrows and setting traps.

With a sliver of health left in the ‘Jaw (and our own health bar), we leap from a ledge, time slowing as we loose one last deadly arrow straight into its exposed heart. Dusting ourselves off, we saunter over to its smoking corpse, strip the rexy wannabe for parts and set out on our merry way.

This is Horizon: Zero Dawn in a nutshell. A grand, post-post apocalyptic adventure (because just the one ‘post’ is so last generation) that infuses the grand beast battles of The Witcher 3: Wild Hunt with the fluid movement model of the latter Assassin’s Creeds. It’s also flippin' ace.

It might seem trite for a game to draw inspiration so clearly from its peers, but in an industry where open-worlds, parkour platforming and assimilated RPG mechanics have descended into ubiquitous tropes, developer Guerrilla Games manages to take the mundane and it make it interesting again.

Free of the limitations of Killzone - an enjoyable, but ultimately uninspiring shooter series - the Dutch studio has spread its creative wings, conjuring up a sandbox-bound adventure that's ready to plant its triumphant flag atop of Sony's PS4-exclusive mountain.

Horizon may offer many a familiar ingredient - a true open-world (complete with no loading screens), an XP-powered levelling system (with added skill trees), underground dungeons full of treasure and an unending torrent of loot to name but a few - but it's the way it seamlessly weaves them into its unique setting.

Because that world is a character in itself, one that transforms as you explore its every nook and cranny. You'll explore a lush landscapes filled with snow-dusted mountains, glades that sway in the evening breeze and the ruins of old cities that jut from the ground, the grave stones of a long dead civilisation.

Powered by Guerrilla's own Decima engine (handpicked by Hideo Kojima no less for his next game, Death Stranding), the universe of Horizon is by far the most striking looking game on PS4. High praise considering the depths and details of Batman: Arkham Asylum and Uncharted 4, but even running on a regular PS4 everything from the lens glare from a Watcher’s eye to the wrinkles on an NPC’s face shine through. An impressive feat for an open-worlder that isn't GTA 5.

Of course, running with the added performance benefits of PS4 Pro, Horizon looks even more incredible. It’s stunning 1080p presentation barely drops a frame while colours are more vivid and blacks that bit deeper. Horizon has been hyped by Sony as the poster child for PS4 Pro's true potential, and we're pleased to see it proves to be just that.

There are, however, a few technical issues with the version running on a vanilla PS4. They aren’t major issues, but we found characters often dropping into place a few seconds late or jarring camera changes that zoom in and out of a NPC’s face. They’re small niggles, but they can irk enough considering how many conversations you’ll be having on your travels.

And while Horizon's story certainly offers its fair share of heart ache and intrigue, it's the the hunting and slaying of them there robo dinosaurs that's Horizon's real bread and butter.

Horizon's robotic ecosystem is a diverse thing, and you'll study each one's weaknesses, bringing them down with bows, traps and spears. You'll descend into the heart of Horizon's captivating playground, unravelling the mystery of the world that was once and the villains that inhabit it now.

It's combat doesn't have quite the intricacy of The Witcher 3's meticulous battles, but it's still a thrilling thing to be fighting a nasty Glinthawk in the sky before a Bellowback suddenly emerges from a lake all snapping jaws and icy breath.

Combat relies mostly on ranged combat with your bows (the aforementioned ropecaster binds bigger enemies down, the sling lobs bombs, etc) and the clever use of traps to stun various human and robotic foes. Melee combat is a little flat by comparison, your humble spear feeling oddly awkward and slow in such a fast-paced game.

Fighting human enemies feels as turgid as it does in the likes of the rebooted Tomb Raider (a series Horizon draws from with its smooth climbing mechanics and on-the-go arrow crafting), but machine combat is a revelation. Each beast requires vastly different tactics and weapons - fail to do your homework and you’re robo chow.

Thankfully, main heroine Aloy is more than up to the task. Voiced by the brilliant Ashly Burch (who stole the show as Chloe in 2015's Life is Strange), the plucky protagonist is the perfect analogue to the likes of Lara Croft - a huntress whose need to hunt both machine and man makes perfect sense in a neo-primitive world. Guerrilla does offer the chance to make more compassionate or cold responses in dialogue, but her fiery personality never gets lost along the way.

There's also something wonderfully progressive about Horizon's fictional society - a world built upon a matriarchy, where women aren't damsels in distress but warchiefs, adventurers and priests. Even one of its Game of Thrones-style religions praises an omnipresent All-Mother.

Sure, some of its mechanics may be somewhat familiar, but it’s how Horizon uses them to flesh out its own world that leaves the biggest impression. Aloy’s handy Focus device enables her identify foes and points of interest Detective mode-style, leading to many a trail tracked through the wilderness like a post-post-apocalyptic sleuth.

Weapons can be modified on the go, but with an interesting caveat that sees one stat reduced as another is buffed up. Even outfits can be upgraded in such a way. And, since most of this modifications are found by defeating bigger and badder machines, you’ll find yourself hunting metal more than anything else.

That’s not to say Horizon lets its open-world take over. There’s a genuinely interesting story to follow, one that draws you in further as you seek out the source of a terrible corruption and the details of your own origin.

Sure, the dialogue can lose itself in over exposition and lore - especially how Aloy will vocally prompt you a little too often - but there’s a real emotional heart to its plot that makes even the smallest of side-quest seem meaningful.

Despite launching in one of the busiest months in recent memory, Sony has found a fine successor to Uncharted in Horizon: Zero Dawn. And with one of the most visually impressive open-worlds we've even explored and a bestiary of mechanical creatures to hunt, Horizon finally proves Guerrilla Games is one of the world's most talented developers.

Need a reason to upgrade to PS4 Pro? Horizon: Zero Dawn is the game for you.