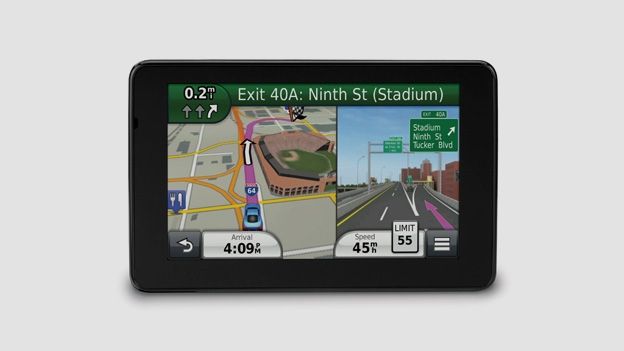 The Garmin nüvi 3490LMT brings a slick smartphone experience to satnavs making it one of the top models around. Read on to find out more

If there's a polar opposite to the trend for big, tablet-esque satnavs like the Navman Panoramic, it's the Garmin' nüvi 3490LMT. Slim, sleek and a little bit slinky it trades on compactness and gadgety deisrability.

To put the Garmin nüvi 3490LMT in context with larger satnavs like the Navman Panoramic, it's a bit like the difference between the Samsung Galaxy S3 and the Apple iPhone 4S. The Samsung's larger screen comes with a wow factor. But the iPhone is a much more tactile, and easy to interact with for many.

The same applies to the Garmin nüvi 3490LMT. Thanks to the use of capacitive touch technology, it's super responsive. Most of the competition still use resistive touchscreens. Suddenly, they feel like a bunch of slackers by comparison.

Part of the reason why navigation devices have previously eschewed capacitive touch tech is the desire to avoid unwanted inputs. After all, it's easy to give the screen an unwanted poke as you bumble down a bumpy backroad.

But it's also extremely frustrating to have your inputs ignored when what you really want to do is concentrate on the road ahead. Long story short, our time with the 3490LMT has us thoroughly convinced that capacitive touch is the way forward for navigation devices.

As for the extras, the Garmin nüvi 3490LMT includes 3D traffic (which is significantly better than the TMC traffic data you get with offline navigation devices) and pan-European maps.

Both work fairly well and are free for life. But in our testing, we preferred the routing provided by TomTom - Garmin's routing was just that little bit less intelligent, tending to choose more direct but traffic-heavy routes.

Thanks to support for Bluetooth telephony, the 3490LMT also doubles as a neat way to add hands-free telephony to your car without adding yet another device into the mix. That's a genuine boon in terms of usability.

We're fans of the colourful yet clearly legible maps, which cover 44 European countries as standard and include that 3D traffic data. OK, some built-in systems such as BMW's iDrive have the Garmin's maps licked for sheer sex appeal. But of the aftermarket options, Garmin's maps are among the best.

Beyond the core nav features, there are plenty of frills, too. There's fully hands-free voice control, for instance, which is the best such system we've tried, as well as lane guidance, a unit converter and much, much more. But it's the responsive screen and slick interface that really makes the Garmin nüvi 3490LMT a winner.