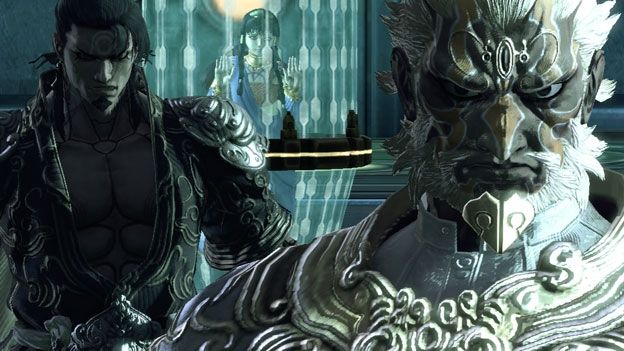 Like all games, Asura's Wrath wants to tell you a story although, in this case, your involvement in how the plot pans out is actually secondary

If you're what would be called a 'traditional' gamer then the first 20 minutes of Asura's Wrath may come as a bit of a shock to the system. Please note that when we say shock we don't mean a mere pinch on the arm, oh no. 'Playing' through the introduction is essentially tantamount to having your senses gently beaten with the angry end of slightly miffed rhinoceros.

This is because Asura's Wrath is one of the most deceptive games you'll see on the shelf. Pick it up and the Xbox 360 and PS3 title will greet you with an appearance that simply suggests it's business as usual for Capcom. To assume that this is all there is to it would be a grave mistake.

Ah, this is awkward. You see to imply that Asura's Wrath really has any structured way of being played, in the sense of the word 'features' would be a complete fallacy.

Granted, in the moments when you're given control of the demigod General Asura you will find that pressing 'b' will in fact make him get angry at someone, while pressing 'y' will cause him to vent several hundred thousand years worth of rage in a direction of your choosing.

Alongside these two attacks are a long range fireball attack which can be used for anything from taking down flying demons to destroying whole battleships.

Apart from that, the game relies heavily on timed button prompts, with each press unleashing a montage of bright colours and pain on whoever it so was that gets in his way.

It's a technique that'll have you feeling borderline lazy. With the game dishing out so much of the punishment on your behalf you almost feel left out by simply having to press one button. Luckily in the instances where you are given control of Asura you can positively feel the anger flow through each blow.

Asura's Wrath at times feels like the gaming equivalent of a Quentin Tarantino film, albeit without Samuel L Jackson's perm. It's a mish mash of cultures, pulling in references from all over eastern mythology.

You are a demigod General known as Asura, as one of eight other demigods you protect your planet from evil. Unfortunately for you your daughter is the only person that can collect the mystical force 'Mantra' that gives the gods their power.

Naturally, just asking would be too easy. Killing Asura's wife and taking his daughter hostage, the gods kill Asura and send him to another world where, with the help of a golden spider he must retrace his steps and unleash unbridled rage on those who took his family.

Take out the golden spider and you'd be fooled for thinking there's a hint of God of War in there. It's understandable but once you start playing you'll soon realise that this is a whole different kettle of considerably peeved fish.

Panning out more like an interactive Anime graphic novel, Asura's Wrath is in every way more story than anything else, the cutscene lengths alone would make Metal Gear Solid feel frankly relieved.

Working your way through the story, you're given a graphic novel interlude between each chapter followed by cutscenes interspaced with sporadic combat.

For this game to truly work then, the storyline and visuals would have to be out of this world, and in this respect we're happy to report that it is unlike anything you will have ever seen.

From elephants the size of mountains to fighting a god the size of a small moon this game has a scale about it that goes beyond anything a TV can reproduce. And in many ways that is both its finest and weakest trait.

As an experience alone this game is worth playing. Initially it'll most likely have you frothing at the mouth with impatience as you wait to finally use the controller for something other than skipping to the next scene.

Once you get past this stage however you'll begin to be won over by its sheer scale and originality. It's not something you'll probably play more than once, but then again you won't need to as it'll be stuck in your head for days.