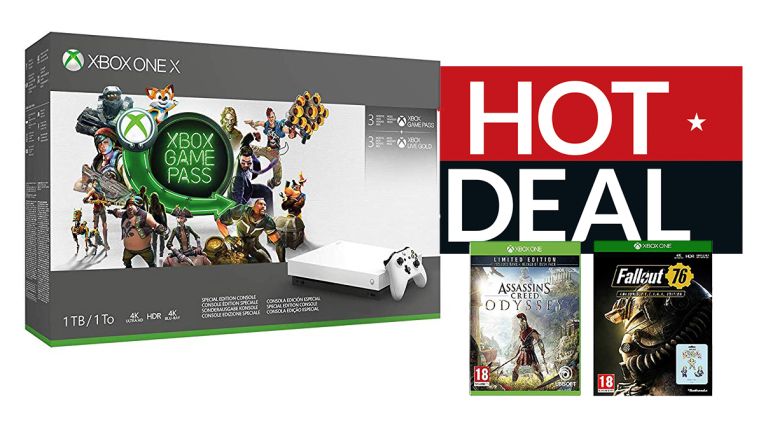 If you've had your eye on the lush white Xbox One X gaming console then this sweet bundle deal from Amazon for Black Friday is definitely worth a look.

You get the 1TB white Xbox One X console itself along with three months of Xbox Game Pass and Xbox Live, as well as a copy of Assassin's Creed Odyssey and Fallout 76, for only £399.99.

Microsoft Xbox One S, Forza Horizon 4, Tekken 7 & Project Cars 2 bundle | now £179 (was £249.99)
Holy hell! Now this is the Xbox One S deal to end all Xbox One S deals. Currys is currently offering the Ultra HD 4K Blu-ray drive-packing Xbox One S gaming console, along with copy of awesome open-world racer Forza Horizon 4, Tekken 7, and Project Cars 2 for just £179. That's a massive £70.99 price reduction off its regular price, and simply insane value for money. These are going to go fast, very fast.View Deal

Xbox One X 1TB console | Forza Horizon 4 | Forza Motorsport 7 | £359.99 at Amazon
This is ridiculous discount of £90 and a truly great Xbox One X console bundle deal. You get the 1TB Xbox One X console and both awesome fun Forza racing games for just £359.99. A crazy-low price on the world's most powerful console.View Deal

Xbox One X (1TB) Fallout 76 bundle | $429 at Amazon (was $499)
Microsoft's gone and bundled the latest Fallout game with the most powerful console in the world for the same price as the system on its own. However, you can save $70 off that price when you buy this awesome deal through Amazon.View Deal

1TB Xbox One S | Battlefield V | now £199.99 at ShopTo's ebay store
This deal is identical to the one directly above but bundles in the excellent FPS shooter Battlefield V Deluxe Edition instead of Forza. 29 have already sold, so again we advise you to move fast if you like the look of this Black Friday deal.View Deal

1TB Xbox One S | 2 controllers | £179.99 at Argos
While this bundle is available at the same price over at Amazon, it still remains a very attractive proposition for Xbox gamers looking to pick up a new Xbox One S system with local multiplayer in mind, as it comes with two controllers instead of just one. That white finish… damn!View Deal

Xbox One X 1TB | White | 3 Months Game Pass | 3 Months Xbox Live |£379.99 at Amazon
Fancy that lush Xbox One X console in white? Well this is the Black Friday deal for you. You get the luxe console along with 3 months of Game Pass and 3 months of Xbox Live for just £379.99. Retailing now over at Amazon.View Deal

Xbox One S 1TB console, Battlefield V, Fallout 76 Special Edition, and Spyro Reignited Trilogy | now £199 (was £329.97)
This is a shut up and take my money Black Friday deal if ever we saw one for people currently in the market for an Xbox One S. That's because Amazon is offering the 1TB Xbox One S console along with online RPG Fallout 76, frenetic FPS Battlefield V, and top fun Spyro Reignited Trilogy for a mind-blowing £199. That's a stupidly large price slash of £130 off its regular price of £329.97. A great console and a brilliant bundle of games for one incredibly low price. Move fast if you want to score.View Deal

Xbox One X 1TB Foza Horizon 4 bundle + Red Dead Redemption 2| now £409.94 (was £429.98)
Cracker jack of an Xbox One X bundle deal here. You get the world's most powerful console along with a copy of superb racer Forza Horizon 4 and epic open-world action adventure Red Dead Redemption 2 for only £409.94. That's a tidy £20 price drop from Amazon on truly great gaming hardware and software.View Deal