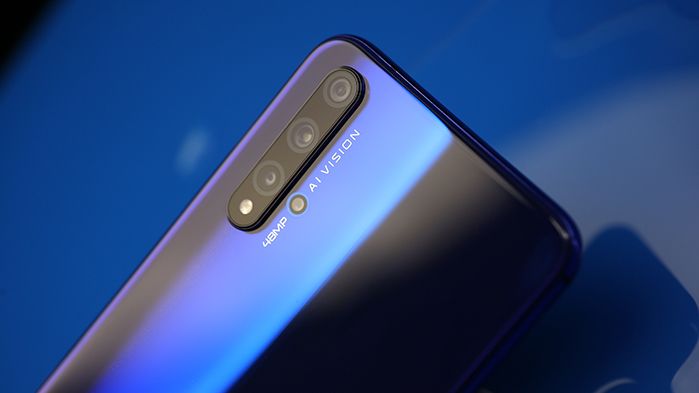 The Honor 20 was launched recently at a jam-packed launch event in London, England, with the Honor 20, unveiled officially for the first time.

And, thanks to a selection of genuinely impressive hardware and feature reveals, T3 was blown away by the range and, specifically, the Honor 20, which is without doubt the best phone the handset maker has ever produced in terms of delivering amazing hardware and features at a very affordable price point.

For those who missed the big show, the entire launch event can be watched in the below video, which was filmed live at Battersea Evolution London.

And be under no illusion, the Honor 20 is very much the culmination of years of innovation and disruption by Honor. Indeed, ever since the maker released the Honor 9 back in 2017, a phone which T3 called "the bargain of the decade", Honor has been on a 5-star review roll, with the Honor View 10, Honor 10, Honor Play, and Honor View 20 all receiving perfect scores on review.

The Honor 20, though, which ships with an impressive 6GB of RAM, 128GB of built-in storage, a rapid Kirin 980 processor, and a large 6.26-inch display, is by far the most technologically advanced of the lot, something which makes its price of £399.99 incredibly attractive.

As is typical with Honor, though, the reason why the 20 is one of the most exciting phone launches of the year for tech enthusiasts is its unique, game-changing design aesthetic, as well as its simply incredible camera system.

In terms of design, the new hotness is Honor's Dynamic Holographic plating technology, which grants the back of any Honor 20 a very colourful and unique look and feel, with holographic flashes of colour appearing at various depths. It is a genuinely impressive display to behold, which makes sense considering just how difficult it has been to master.

According to Honor, in order to produce these brilliant, holographic flashes of colour with visual depth, the maker has engineered a technique that combines colour and depth layers into a single composite for the rear case of the handset. So cutting-edge is the process that 20 rear panels in every batch of 100 produced don't make Honor's quality grade and are recycled.

If T3 were to recommend the Honor 20 on just one feature alone, though, then it would without doubt be its simply amazing camera system.

And that is saying nothing about the Honor 20’s truly remarkable 32MP front-facing selfie camera, which boasts the ability to intelligently combine four pixels into one larger pixel for consistently brighter and clearer selfies. Well executed features like the all-new beautify and portrait modes also deliver in terms of natural, subtle bokeh.

On top of all that, the Dual-NPU and the Dual-ISP of the Honor 20’s 7nm Kirin 980 AI chipset also grants the ability to collate the best elements from each photo and combine it into one “Super 48MP Photo”, creating incredibly detailed, superior photos.

Throw in the Honor 20’s excellent Super Night Mode, which helps you shoot in even the darkest of environments, an AI Ultra Clarity mode for shooting in the day, and Honor's excellent Master AI, which helps identify what you're shooting and tweak settings so that they are optimal, and it is easy to see why T3 was so impressed with this camera system.

It's also impossible not to mention Honor's latest innovation, Super Bluetooth, when it comes to picking out reasons why T3 is super excited about the Honor 20. Announced just after the Honor 20 launch event, Super Bluetooth delivers the ability to achieve a very large maximum connectivity range of 265 meters in a barrier-free environment.

The real strength with the Super Bluetooth system, though, on top of the incredible connectivity range, is how it allows the Honor 20 to connect effectively to not just one or two Bluetooth devices, but an entire suite of them in any given space, be that an open air office environment or a multi-room one like a user's home.

Super Bluetooth can achieve these feats thanks to the Hi1103 chip that powers it, which itself utilizes advanced AI algorithms to help the phone identify different environmental factors intelligently and adjust its Bluetooth signal accordingly to deliver an optimal connection.

And, for us here at T3, where audiophile sound quality is paramount, Super Bluetooth seems like a perfect partner for the Honor 20 Series' Virtual 9.1 Surround Sound. Virtual 9.1 is a brand new surround sound system designed to create an immersive and a cinematic audio experience for listeners, with rich and enveloping audio capable of being accurately reproduced from all directions. Pair the Honor 20 with a pair of the best Bluetooth headphones, and you'll be in surround sound heaven.

There is, though, even more to get excited about with Honor 20, which T3 is currently in the process of comprehensively reviewing. So watch the launch event video to get all the details, then check back in to T3 soon for our official take on the Honor 20 Series.