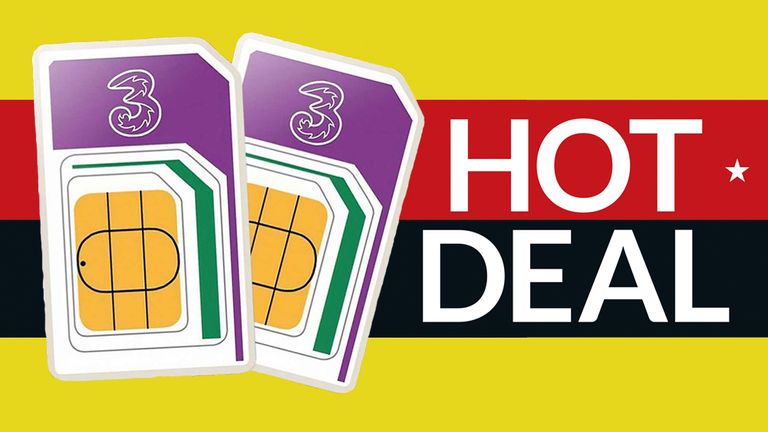 In terms of the pre-Black Friday deals we've seen so far, this stuffed-with-everyday-value offer from UK mobile network Three is one of the absolute best. That's because it delivers a SIM only plan that perfectly balances affordability with a large monthly data allowance.

The SIM only deal, which comes on a 24-month plan, bags you a large 12GB of data as well as unlimited minutes and texts for just £13 per month. You also get support for personal hotspot functionality, roaming and Three's "Go Binge" entertainment program included, too.

We see a lot of SIM only deals here at T3.com and, for the money, this delivers super value for money in our eyes. Unlimited data is nice, and it is available at Three right now for £20 per month, but the vast majority of people get nowhere near 12GB of mobile data usage each month anymore thanks to the prevalence of Wi-Fi, which is now the norm in homes, work places, coffee shops, department stores, airports, trains, buses, restaurants and hotels.

Equally, there's plenty of SIM only deals that deliver pitiful amounts of data, meaning that while the monthly cost seems great, when you inevitably end up going over it you then get fleeced by the provider. This deal avoids that data trap, while also being very, very affordable.

As such, this SIM only deal sits in the sweet spot in our eyes between affordability and real world usefulness, and is easy to recommend as a result. The full details of the deal can be viewed below:

Three mobile SIM only deal | 12GB data | Unlimited texts and calls | £13 a month (24-month plan)
We think this SIM only deal is ideal for the vast majority of phone users, with a large 12GB of data delivered along with unlimited minutes and texts for just £13 per month. Three's excellent extras are also included, so you get its best-in-class roaming ability, for example, and the SIM is also 5G ready, too. Free delivery is included.View Deal

In our mind, £13 a month is the equivalent of buying, say, four cups of coffee on the high street, so definitely feel it is affordable. And, while we're measuring things in terms of cups of coffee, for another two beverages you reach Three's unlimited SIM only package, which delivers unlimited data, texts and minutes for £20 a month. The full details of the deal can be viewed below:

Three mobile SIM only deal | Unlimited data, texts and calls | £20 a month (24-month plan)
Want the freedom to stream the entire extended Lord of the Rings trilogy in 4K, to be then followed by the downloading of the entire Harry Potter series of films in 8K? Well, then, this is the data plan for you, as you get unlimited, unthrottled data for £20 per month. Three's Go Roam Around the World feature is also included, allowing you to use your allowance abroad, and as with the deal above, the SIM is 5G ready. Free delivery is included.View Deal

For even more great SIM only deals be sure to check out T3's authoritative best SIM-only deals guide, as well as our best phones, best Android phones, best cheap phones and best gaming phones for plenty of top handsets.