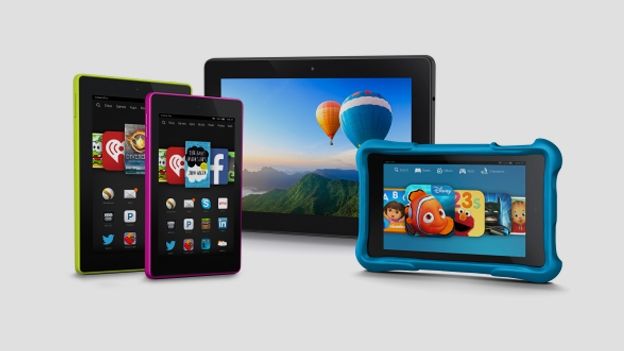 Despite the disaster that was the Fire Phone - which most of you will probably have forgotten about - Amazon isn't giving up on hardware just yet as it's new Kindle Oasis proves. Its hugely successful ereader and the reasonably successful Fire tablets are due for a refresh pretty soon.

We've rounded up all the rumours and leaks into one convenient place for you.

What's the story so far?

The full-colour, LCD display Fire tablets were first launched in 2011. Again, a plethora of different models have appeared down the years, with the most recent launching in September 2015 - so again a hardware refresh is likely to be imminent.

Based on the bunch of variously sized slates Amazon introduced last September, it's aiming for low specs and low price from here on in - presumably that's the only way it thinks it can compete with Apple in the rather lukewarm waters of the tablet market.

And so if Amazon is preparing another refresh this autumn then we wouldn't expect to see anything too exciting: probably the same bargain basement price with slightly superior technology for your money in terms of internal components and display quality.

As far as Android tablets in general are concerned, there's not a great deal of quality out there, with the exception of Samsung's top-end Tab S2 slates and Google's Pixel C. Amazon might have plans for a new premium model but right now it seems unlikely.

Of course these tablets get more people using Amazon's various services (like Amazon Instant Video) so it's equally unlikely that Bezos and his engineers would pull the plug completely - just don't expect any major updates arriving in the near future.

Anything else to watch out for?

The experts in the know seem to think Amazon has abandoned its smartphone plans after getting its fingers burned with the Fire Phone. A second-generation model isn't completely out of the question but two years on we'd be surprised to see Amazon go back to it.

Of course Amazon has hit us with more than one hardware surprise in the past (including the aforementioned Fire Phone) and Bezos is certainly a man who likes to keep innovating - it would be nice to see an unexpected device or two appear in the months ahead.

But it's not as if the Amazon team is short of projects to work on: the company seems to have had more success with its streaming boxes and sticks and it would make more sense for Bezos to focus in on devices that he knows are going to shift in significant numbers.

On top of that Amazon has got all of its cloud services and the small matter of its little online shop to think about as well - it's not inconceivable that there are some truly exciting bits of hardware kit on the way, but we wouldn't recommend holding your breath.