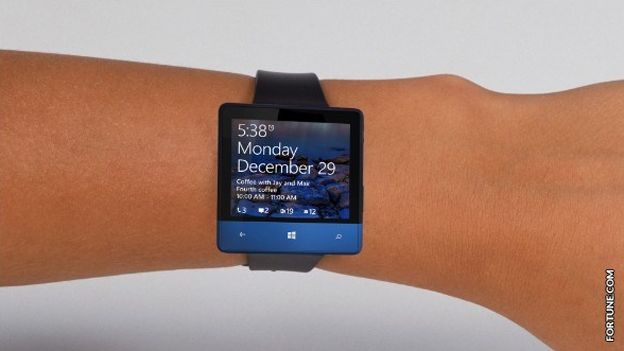 Microsoft is expected to join Sony, Samsung, Apple and a multitude of other companies in launching a smartwatch – but just what can we expect from the Redmond-based giant?

The company hasn't denied that it is looking at smartwatches. But like rival Apple with the iWatch, it has refused to commit to the record that it is definitely working on one.

Despite that, we have a rough idea of what to expect from the rumoured Microsoft smartwatch.

So what do we know…?

It was part of the Xbox team, but not anymore...

Back in July, news broke that Microsoft had moved its smartwatch project from its Xbox team to the group responsible for its Surface tablets.

The move followed Microsoft's reshuffling of the company structure the week before. That change saw all of the company's hardware teams – including Xbox and Surface –become part of a new hardware-focused division, under the supervision of Julie Larson-Green.

It appears that moving the smartwatch from the Xbox team to Surface was orchestrated by Larson-Green.

According to reports at the time, the move essentially saw much of Microsoft's previous efforts scrapped and a new device enter development.

But what exactly what impact did that have upon the watch that may or may not eventually end up on your wrist?

It will be an extension of Windows 8

The original Xbox-developed smartwatch project appears to have been focused around fitness. While there is only anecdotal evidence to support that, it does make a lot of sense.

If there is one area that Microsoft has focused on with the next generation Kinect, it is fitness. The company has teamed up with a number of fitness companies – including Nike and Adidas – to develop software that takes advantage of its motion sensor technology.

Indeed, the company put a large focus on exercise when it talked about Kinect at E3 earlier this year. With such a lifestyle/active-focused marketing message, an Xbox-branded fitness-orientated smartwatch in the vein of Nike's Fuelband – but with much tighter Kinect integration – makes a lot of sense.

However, it appears that idea went out the window after Larson-Green moved the project to Microsoft's Surface team.

That move signalled a major shift in the way that Microsoft looks at the project –even if the company has never officially acknowledged that the move happened or that the smartwatch even exists.

By moving the project to the Surface team, it moved the purpose of the smartwatch away from fitness and more towards a general 'smart' wearable.

Perhaps the most noticeable impact the move will likely have is a refocusing of the device towards Windows 8. Indeed, reports in July suggested that the device will be powered by a heavily modified version of Windows 8 itself.

While the move will undoubtably move the smartwatch away from a fitness focus, it will mean it will likely integrate more closely with Windows Phone 8 and other Windows-powered devices.

Expect notifications and music control to be major features.

According to reports in July, the prototype smartwatch that exists within Microsoft are housed within Oxynitride Aluminium frames. The metal is an expensive, translucent form of aluminium, and is said to be three times harder than glass.

Earlier in the year, a screen-size of 1.5-inches was touted. Reports at the time put their sources as component manufacturers.

It is also said that the watches will come with detachable wristbands available in a number of colours.

It is unknown whether or not the fitness features – and indeed Xbox One compatibility – will survive the move to the Surface team.

However, what we have heard is that there are a number of prototypes in existence. Some include up to 6GB of internal storage, while others also come with cloud storage on top of that supported by LTE connectivity.

Quite what you'd need 6GB of storage for on a smartwatch is beyond us, unless the company is planning on using it as a way to attack Apple's iPod range again after a failed attempt with its Zune players.

Other than that, little is known about the purported smartwatch's functionality.

In the middle of October, it emerged that Nokia's phone division – which Microsoft announced plans to buy in September – was at an advanced stage working on its own smartwatch.

Named the Facet, its patent details a “multi-segment wearable accessory”. In plain English, it is a modular watch where each segment of the watch displays a difference screen.

The company even released a video showing its prototype in action (see below).

It's still unclear what impact Microsoft's intentions to purchase Nokia will have on the Facet. It's also unknown whether some of the technology from the Facet will find its way into Microsoft's own smartwatch.

However, following Microsoft's announcement of its plans to purchase Nokia, it is extremely unlikely the Facet will make it to market.

Both of these are mysteries for the time being. With prototypes existing, it is possible Microsoft's smartwatch could launch before the end of 2014, however, that is just conjecture.