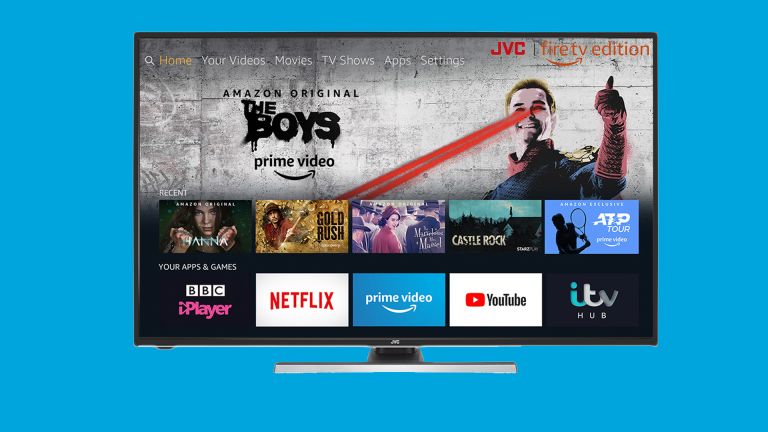 Just as America gets a lot of the best TV shows before we do, it’s also had televisions with Fire TV inside for a year or so, while we’ve gone without. But now JVC Fire TV Edition brings all Fire TV’s great shows, movies and Alexa voice control to these shores… and to your home.

On sale at Currys PC World stores and Currys.co.uk, JVC Fire TV Edition is a 4K LED LCD television, available in 40-, 49- and 55-inch screen sizes. As well as a UHD resolution for stunningly clear images, there’s HDR including Dolby Vision, which beefs up the colour, contrast and brilliance of compatible video. DTS sound technology gives you clear and immersive audio.

As well as Freeview TV channels, the built-in Fire TV gives you access to a huge wealth of apps, streaming TV, movies and catch-up services. There’s the likes of Amazon Prime Video and Netflix, but also a large selection of specialist channels, with everything from sport to horror movies. Catch-up, movies on demand, boxsets and more are all on offer.

The genius of JVC Fire TV Edition is that it makes it so easy to find what you want to watch, from this vast emporium of quality content. Alexa’s intelligent voice control not only lets you search the most popular channels – Amazon Prime Video and Netflix – it also allows you to start a show, control playback, change volume and more, just with your voice.

As well as TV control, the JVC Fire TV Edition has all Alexa’s usual bag of tricks, from news and weather to controlling your smart bulbs and other home gadgets, to playing music.

As you’d expect from JVC and Currys PC World, pricing on these TVs is very keen. To enter this new experience of smart TV control and oodles of content costs from just £329…