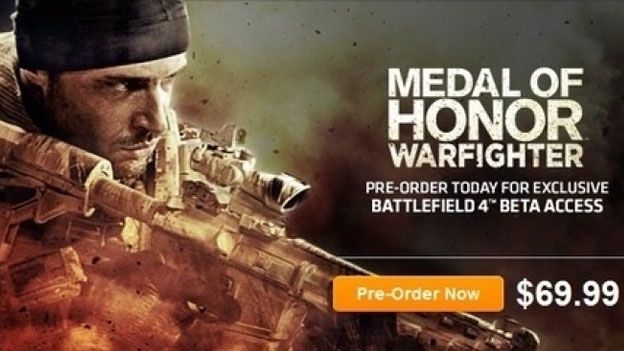 Following the record success of the Battlefield 3 release, publisher EA has confirmed plans for a Battlefield 4 release as Beta access is offered

Having topped gaming charts across the world with the recent Battlefield 3 release, developer and publisher EA has revealed its plans to launch a Battlefield 4 title in the near future.

Whilst it has been widely expected that a Battlefield 4 offering would be created off the back of its predecessor's success, a Battlefield 4 release date could be with us sooner than expected after EA revealed that gamers who pre-oder Medal of Honor: Warfighter ahead of its October release will be offered free, exclusive Beta access to Battlefield 4.

Having made a premature appearance earlier this week via the Origin Store website, EA has since confirmed the MOH: Warfighter promotion that will see those snapping up the FPS release ahead of launch being rewarded with "exclusive Battlefield 4 beta access."

Far from the first time a Battlefield 4 release had been rumoured, Monday's early unveiling was preceeded late last year, and just days after bitter rival Call of Duty: Modern Warfare 3 hit stores across the world; when EA's President confirmed the company will produce the much demanded Battlefield 3 follow-on.

Taking to the stage to give a keynote speech at the University of Southern California, EA President Frank Gibeau openly revealed “there will be a Battlefield 4.”

The highest selling game in EA's history, 10 million copies of Battlefield 3 were shipped ahead of launch with half of these being sold during the title's opening week on sale.

Having topped the UK All Format Gaming Chart for a two consecutive weeks following launch, the title was finally dethroned by the dominant force that is Call of Duty: Modern Warfare 3 as the Activision title saw opening day sales top a staggering 6 million copies.

Despite confirming that Battlefield 4 would indeed be made, Gibeau failed to shed any further light on the title leaving a Battlefield 4 release date and Battlefield 4 multiplayer features a mystery.

Have you already snapped up a copy of Battlefield 3? Already looking ahead to Battlefield 4 and its presumably superior FPS credentials? Let us know via the comments box below.