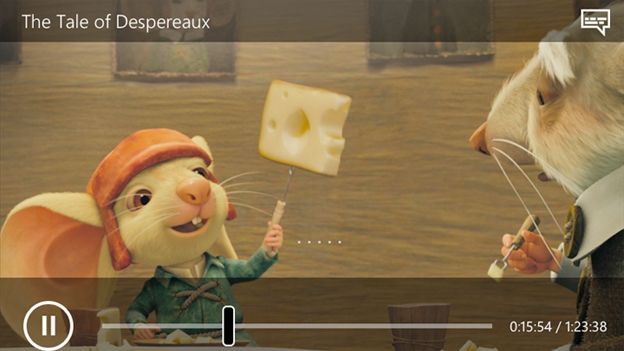 Now iPhone apps allow you to life the FA Cup and change your dreams to wild west shootouts. Don't worry, though, they still let you fling irate birdies creatures at greedy pigs.

Netflix comes to Windows Phone to narrow app gap
Amid reports that Microsoft is paying iOS developers to bolter its Windows Phone App Marketplace, one of the big games has arrived on its own accord. UK Windows Phone users can now access the Netflix app, giving potential Nokia Lumia buyers one more reason to jump on board.

Lift the FA Cup with Budweiser AR app
The smartphone age has brought us many things, but none more grandiose than the ability to turn a humble beer mat into a fully-3D rendered vision of the most famous trophy in British sports. Ahead of the FA Cup semi-finals this weekend, you can point your iPhone or Android phone's camera at the special Bud beermat and see what the Cup would look like in your hands.

Dream:ON for iPhone aims to make your dreams more pleasant
Sick of your bedtime ponderings being hijuacked by mothers in law and ex-girlfriends chasing you through your own personal Hell? Well this is the app for you. By playing a 'soundscape' at the onset of dreams (i.e. when you stop moving) Dream:ON for iPhone aims to make your dreams sweeter. The app aims to conjure images of walking through the woods, laying on a beach or any number of pleasant scenarios you can buy as in-app purchases.

RIM exec calls Google Play Store a "chaotic cesspool"
The BlackBerry App World, might not be setting the world on fire, but, hey, at least its not a "chaotic cesspool" like the artist formerly known as the Android Market. That was RIM's verdict this week as it vowed to cut down on app piracy and entice developers by tightening up side-loading permissions on the BlackBerry PlayBook.

Spotify launches Play Button widget
Until now, Spotify has been restricted to the desktop and smartphone apps, but its about to go everywhere. The Swedish streaming giant has announced a Play Button widget which allows for whole albums to be embedded into web-pages or blog posts. It's completely legal too and artists will still get paid.

iOS App Review: Angry Birds Space
The single most downloaded application in history is back, but this time they've boldly gone where no furious winged beasts have ever been before. "The new gameplay encourages inventiveness and ingenuity from the player, and you're less likely to gnash your teeth down to the jawbone because you've been stuck on the same section for half an hour solid. Overall, Angry Birds Space is a surprisingly strong addition to the nest," says our reviewer.

Android App Review: Zeebox
You've seen the TV ads (TV adverts for smartphone apps? We know, right?), but what's Zeebox really all about? Alrready a success on iOS, it's a neat second screen companion app, which taps into all of the social activity going on while a show airs on TV. It's then easy for you to join the conversation. This is a Beta version at the moment, so there's still more to come. Check out our Zeebox for Android review.

iPhone App Review: Scramble With Friends
Not content with making the digital world obsess over a Scrabble remake, Zynga has struck again with its cutely named Scramble With Friends, i.e. Boggle. "Essentially, you have a load of Scrabble-like letters on a grid and your job is to make up as many words as possible in the allotted time. Along the way there's numerous add-ons you can get which freeze time and so forth which will help with trying to get as many points from the words and letters as you can." So, just different enough from Boggle to keep the lawyers away? Great.