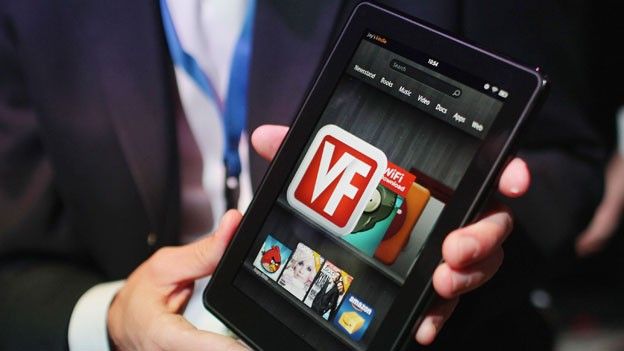 Amazon has announced that the who's-who of the app world is fully on-board with the Kindle Fire tablet, set for launch in the US next Tuesday. Still no word of a UK launch though.

The Amazon Kindle Fire users will be able to choose from masses of a host of top-line apps when it launches in the US on 15 November.

The $199 tablet, which is yet to be announced for the UK market, will arrive packing top streaming apps like Netflix (also set for the UK early next year), Pandora and Rhapsody.

On the gaming front, top mobile players like Rovio and Zynga are both signed up meaning that Angry Birds and Words With Friends will both be available and optimised for the 7-inch Amazon tablet. There'll also be Plants vs Zombies and Doodle Jump form the Amazon App Store.

Naturally, the top social networking players, Twitter and Facebook will be on-board as well as news apps from Pulse and Bloomberg.

Kindle VP Dave Limp says: "We started talking to app developers everywhere the day we introduced Kindle Fire, and the response has been overwhelming."

"In addition to over 18 million movies, TV shows, songs, books, and magazines from Amazon, we are excited to offer customers thousands of apps and games to choose from on Kindle Fire – from Pandora and Rhapsody to Facebook and Twitter to Netflix, as well as popular games from EA, Zynga and many other top game developers."

Amazon also confirmed that it'll continue its daily Android Market-bating tablet of giving away a free premium app every day.

With the tablet's launch in the US just one week away, isn't it about time Amazon put us out of our misery and announce the super-cheap device for the UK.