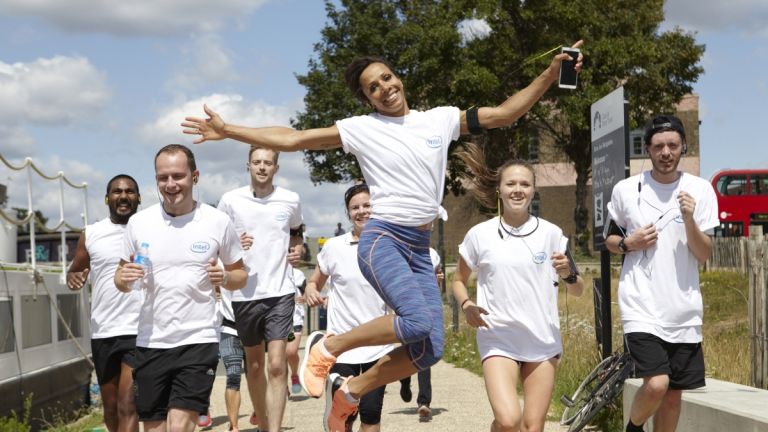 What does one of this country's greatest athletes think of wearable tech? Should we all be using heart rate monitors? And why did her coach always put his hands around her neck after each run?

It's a tricky thing, talking to super-athletes about the technology we mere mortals think about buying. While we're wondering if the Microsoft Band might magically help us lose weight, they're up at 6AM pushing themselves to the limit.

But that's the great thing about modern technology. T3 went running with Dame Kelly Holmes to try out the Intel SMS Audio Biosport headphones, which feature an integrated heart rate monitor in the ear piece (supposedly one of the most accurate places to pick up your ticker's beats), and she even let us keep up with her.

But what does Dame Kelly Holmes (who we were desperate to call DK, but lost our nerve) think of the new wave of wearable tech? How does heart rate training help new runners get faster? And what tech has she found indispensable since she retired?

T3: How has the way you use technology evolved since you first started training?

Dame Kelly Holmes: It's massive. Technology as a whole since I started, and retired, has dramatically changed in the way people use it. People want to know a lot more about their progression and performance, and finding easy ways of doing that.

For example, we've been using heart rate in our ears today, and most people hate using chest straps and just won't use them.

I like the way the SMS Audio Biosport works, not having to look at your heart rate (the headphones partner with the Runkeeper app to suck in the heart rate data).

I would constantly be looking at my wrist, rather than getting on with the running.

What technology did you use when you first started out?

We didn't use anything! It used to just be my coach at the side of the track who would come and put his hands around my throat and take my pulse like that!

I have to have music these days, as when I run I get bored like most people. I actually really get bored running! [laughs].

I know it sounds weird, having trained all my life on my own (unless I've had my coach screaming and shouting at me), but now I have to have music. It's a motivator and I like to know what I'm doing.

So you didn't use music even when training alone?

Didn't even do that at the start! I was young, and I couldn't go around with a Walkman as it was too big and bulky.

It's only more recently, as technology has improved, that things are lighter, easier to use, they're immediate - when I was younger it wasn't like that.

Do you use wired or Bluetooth headphones when you train?

Both! I've got these SMS Audio ones, which are wired ones, and these are really cool for having this little bit [to hold them in your ears]. I have such little ears. Nothing fits!

I've also got some bone conductor ones as well from AfterShox.

How can beginners feel less scared of heart rate training? Most people who start don't know how to use it properly…

It's actually used in a variety of ways. If you're somebody who's quite into their sport, using the heart rate will allow them to assess their fitness levels and gains.

Actually more importantly: their recovery. When some people go out on an easy run, they do it far too quickly, and that 'recovery is not conducive to [improved] fitness. So they wonder why they're not progressing. It's because they're not recovering enough.

From the other end of the spectrum we've got beginners, people who are perhaps not as fit, and they need to monitor their heart rate because if it's SO high at the beginning they've got to be very careful.

But as they start getting their fitness levels up, they'll see the rate didn't go as high and it'll be lower for longer. Often when people run or train, they think they're tired, but actually if they monitored their heart rate they could push to the next level.

A common problem new runners face is the feeling that they can't go on, that they have to stop. How do you push yourself 'beyond your limits' at the end of hard races?

It's a big mindset to push yourself to a really high effort, to actually believe you're not going to keel over and have a heart attack, that there's more in there.

It's almost like an attainment think, having it in your mind that you want to move to the next level. The only way to do that is to stress your body.

Having a [heart rate monitor] to do that is quite useful, because you can work out your maximum heart rate, and if you've got a monitoring tool they give you the data to look at and realise 'actually, I was alright!'

What are the gadgets you simply can't live without?

My phone, without a doubt. I need immediate access to the internet. And definitely a [fitness] watch of some description.

I use the TomTom Cardio Runner, and I've got to have GPS on my bike. I'm going to get the cameras and also the power meter pedals from Garmin - I've just got a new bike from Specialized, and Garmin will put the [power meter] pedals on and that'll link up to my [cycling computer].

What do you think of cycling turbo trainers (static platforms you put your bike into)? Do you use them in training?

Yep, I have one at home. I quite like those. I hardly sweat when I train, but then I go on the turbo trainer and, oh my God, it really pushes you! It's mad!

It's exciting where [fitness] technology is going. Although it's hard to see where it's going next when you think back even five years, and then look at what we've got now.

Like this? Before you get running, check out our guide to the best running shoes of 2015