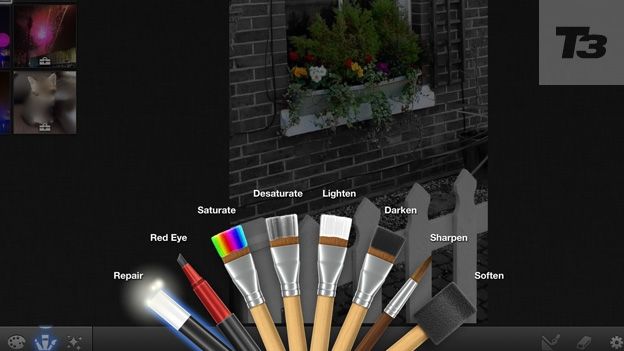 iPhoto brings new photo editing power to the new iPad – promising the power to crop, clean and re-colour your snaps with the flick of a finger

Apple's iPhoto for iPad app brings photo editing to your new iPad 3 (or iPad 2) giving you an easy way to take your tired pics from amateur attempts to something to give Gran on her birthday.

iPhoto is in heavy competition here though, as there are a number of apps such as Photoshop Touch and Snapseed which offer the same kind of functionality but with plenty more bells and whistles.

Apple has performed its usual trick here of trying to make picture manipulation simple and effective without asking too much of the user in terms of photographic knowledge.

The emphasis here is on automatic changes: you can do everything from changing the colour balance of the photo to altering its rotation to make those horizon shots more appealing.

There are far fewer options than you'd get from something like Photoshop Touch, but this will probably be a boon for those people that simply want to make the sky look a little more blue in their holiday snaps.

The iPhoto interface is pretty simple to work out, but many of the icons are a tad perplexing to the first time user. Apple has helped out here by offering up a little icon to give everything a label, making it an easy system to understand.

However, given many of the effects are achieved by wiping your finger over an area of your picture (such as if you want to improve the colour saturation or apply a distortion effect) it can take a while before you realise anything is happening under your digit.

Given the wide range of effects on offer, the interface is pretty easy to use and explore through a few simple taps – but we recommend taking the tutorial if you want to become an expert in how each effect actually works.

If you're not after full photo manipulation and just want to fix or add some decent effects to your picture, then iPhoto comes into its own.

Performing actions like making a photo monochrome then recolouring certain sections yields brilliant results, although you'll need to mess about with the settings and make sure you don't wipe too hard over the photo to get the true effect.

Things like the 'Repair' tool will really amaze those that have never played with photo effects before, as you'll be able to easily remove objects from a scene simply by wiping over the given area – and the result is highly impressive and swift.

The only downside in terms of performance with iPhoto on the new iPad is the speed with which you can undo effects: you'd think it would be instant, but often we were waiting up five or six seconds to see a mis-step disappear.

The fact iPhoto is finally available on the iPad is great news for those that are connected up to PhotoStream, as while you won't be taking many pics through the iPad, the snaps you get through the superior iPhone can be easily downloaded for use on the larger screen.

The new iPad is the perfect tool for editing photos on, as although the graphical power boost isn't great, the Retina Display makes every photo look fantastic, and zooming in on the section of the photo you need to alter offers a very high level of detail

The variety of tools on offer isn't as extensive as other tools on the App Store, but the ability to save your photos into a dedicated journal is a real plus. Getting hold of your photos once edited may also cause a few headaches for those new to the service, but overall it's a great app with more than enough functionality for the average user.