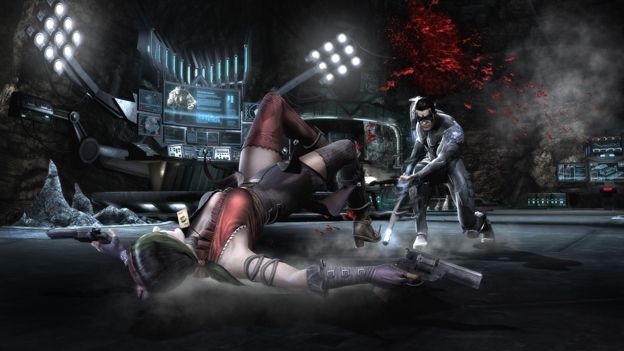 Injustice Gods Among Us is NetherRealm's second crack at the fighting game genre, but is this just cheesy fan service or a genuine player?

Fighting game fans have been spoiled in recent years - and indeed for the last three decades - with a glut of excellent brawlers. The likes of Street Fighter 4, Street Fighter X Tekken and Virtua Fighter 5: Final Showdown have recently proven themselves to be some of the best fighting games ever made - a list that Injustice: Gods Among Us would surely love to tag itself onto.

Injustice Gods Among Us: Story

The wealth of single player modes is headed up by the story mode, which presents a story written by NetherRealm in collaboration with DC Comics. The story comprises of a fixed plot, meaning that you play chapters as certain characters, rather than picking a character for the whole thing.

The idea, we most certainly like. It's refreshing to have a fighting game with a genuine story to play through. Sadly though, the plot itself is rather convoluted, and very difficult to follow.

Alongside story mode are the usual versus and practice modes, the latter of which also includes a decent tutorial that gets you acquainted with the game mechanics pretty quickly.

The 'Battle' and S.T.A.R. Labs' modes, which offer more character specific challenges and specific battle situations, where you might start with decreased health, or be suffering the effects of poison.

We can't help but feel that these three game modes could have been condensed into two, or even just one long story mode complete with specific battle situations à la Soul Calibur 2 (still the gold standard of fighting game story modes, in our humble opinion).

Injustice Gods Among Us: Gameplay

The gameplay itself is a heady mix of elements from various fighters. This is a 2.5D game in essence - the majority of gameplay is in 2D, but interactive elements in the environment often play with the depth of field, giving a 3D effect a little like Shadow Complex.

For once, picking a stage actually makes a difference, with different stages having unique objects to throw at each other (which counts as an unblockable attack) and 'level transitions' where special heavy attacks can knock your opponent through walls into different parts of the stage, doing big damage on the way.

The result is great, with battles instantly feeling all the more epic. Use of the environment is important both tactically and for the sheer spectacle. These are battles between some of the most powerful superheroes ever known, and they should feel as such. And thankfully, they do.

A general lack of depth could be argued for Injustice. As mentioned before, the character roster isn't enormous and characters don't have a huge variety of combos and specials.

But this lack of depth makes Injustice incredibly accessible in a great way. Button mashers won't get very far - the game rapidly teaches you to think more about what you're doing, without overwhelming you with hundreds of different moves.

Injustice Gods Among Us: Characters

As you'd expect of this game, the major selling point is in the character roster. It's certainly not the biggest roster we've seen from a fighter recently - the latest iterations of Tekken, Street Fighter, Virtua Fighter et al have all spoiled us with extensive rosters - but there's a healthy helping of DC favourites.

Good choices have been made with character costumes, and the models themselves look absolutely fantastic, both graphically and in their animations. Clearly, NetherRealm is well aware that the characters are the major selling point, and it's got things spot on in that regard.

Injustice Gods Among Us: Multiplayer

A fair few players are complaining about significant lag if you're playing online. We can't say we suffered quite that badly - the game is playable - but it does feel a little like playing underwater. It's certainly not the joyous online experience that Street Fighter 4 and X Tekken are.

NetherRealm's Mortal Kombat back in 2011 suffered the same issues immediately after release, and was patched to be playable shortly after. Injustice is not as unplayable as Mortal Kombat was on release, but the lag issue does need to be fixed and we're hoping there's a patch forthcoming.

Injustice Gods Among Us: Verdict

We'd go so far as to say this. If you're a casual gamer, this is the most fun, most accessible fighting game out there. It won't baffle you with endless move lists (like Tekken) and the basic mechanics are easy to get to grips with.

Add a wealth of single player modes and the crisp graphics and this is undoubtedly a great package. Even if you're not a DC Comics fan, this is worth a buy, but if the mention of Superman and/or Batman sends you giddy with excitement, Injustice will have you grinning like The Joker.

Injustice Gods Among Us release date: Out now

Injustice Gods Among Us price: £32