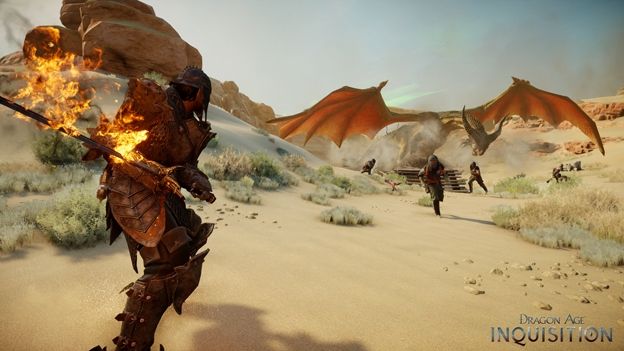 Dragon Age Inquisition is BioWare's latest fantasy epic, and it looks on course to be something special. T3 got a sneak preview...

BioWare is undoubtedly one of the big boys of the RPG genre. Top dog? Maybe. You can make a case for Bethesda, with Fallout 3 and Elder Scrolls V: Skyrim both taking numerous awards last year. Certainly Blizzard is in the mix too - Diablo 3 and World of Warcraft are still played by millions upon millions of people worldwide...

But BioWare has been leading by example for years now, most recently with the Mass Effect series, and with the slightly lower-profile Dragon Age. But before that there was Star Wars: Knights of the Old Republic - one of the greatest RPGs ever made, thankfully now available in full on iOS. And the extremely underrated Jade Empire. And all the Baldur's Gate games. And Neverwinter Nights. It's a seemingly endless list of quality.

Long story short, that rich history is just one reason to be excited about Dragon Age: Inquisition. Here are some more.

The story has moved forward from that of the previous games and though you'll be playing a new character of your own creation, there will be cameos from various characters from the previous two games.

Following the wars of the previous games, a rift has opened in the sky and demons are pouring out (think Elder Scrolls: Oblivion, or Diablo 3). The world is still in disarray, and your character leads the so called 'Inquisition' - a faction that simultaneously seeks to restore order to the world while finding out who is responsible for opening the rift.

As for your character, you can now play as one of many races. You can choose to be a male or female Human, Dwarf, Elf, even a Qunari if you so choose.

Thanks to Dragon Age Keep, you'll be able to import all of your choices from previous games to carry on your story as in Mass Effect. The benefit of a system like Keep is that you don't have to have played the previous games - you can still make the choices you want through Keep. Completionists can even go back and change little bits to play out different scenarios and bits of the game.

Size always seems to come first when it comes to fantasy RPG worlds - the more enormous, awe-inspiring and varied - the better. And a bit of a chat with Jonathan "JP" Perry - Cinematic Director for Dragon Age - confirmed that we can expect all these things in Inquisition.

Firstly, the world is going to be enormous. We mean seriously, seriously big.

"One medium size area in Dragon Age: Inquisition is larger than all of the areas in Dragon Age 2 combined" JP tells us. "Once you're in one of these big open world regions, you'll be able to run around in it without ever seeing a load screen. You can seamlessly enter buildings and caves... you'll only see a load screen when you transition between these huge areas."

As for the load screens between, the times will still be pretty quick on next-gen thanks to the new streaming technology being introduced. Naturally we're talking slightly longer times for the current gen consoles but the team are confident that it won't be anything like the soul destroying heights of Last of Us loading times.

A big world also comes with other benefits too. For the first time in the franchise, Dragon Age: Inquisition will feature mounts to help you traverse the world more quickly.

As you'd expect for a fantasy RPG, the world as a whole contains absolutely masses of content. Caves and dungeons to explore, puzzles to solve and whole areas to unlock through completing quests.

The 30 minutes or so we saw of the game looked really very nice. We'll be honest, it doesn't quite look as polished as what we've seen from Witcher 3, but it's not far off. And JP assured us that the game will be looking much, much nicer when finally released on next generation consoles. Clearly, there's still lots of polish to be added here.

That said, making a game that spans both console generations can throw up it's own graphical problems. We asked JP if there was a sense of limitation when making a game for both current and next gen:

"If we were releasing only on gen 4 (next gen), we would have lots of things we could do that we can't do on gen 3 (current gen). We want to make sure that gen 3 experience is the same."

A really in-depth crafting system and deep customisation for your character are essential to almost any open-world RPG nowadays, and Inquisition will have both. Along with that, the combat system is a mixture of that from Origins and Dragon Age 2 - with party combat coming to the fore.

The tactical view from Origins is also back, which is great news. The main reason being, Inquisition looks like it'll be the toughest Dragon Age to date, certainly in terms of combat. Combining the powers of your party is vital, and tactical view will let you pause the battle, to position your party and plan your attack.

Resources are limited, and health doesn't regenerate on it's own so the focus is on finishing every battle as cleanly and quickly as possible.

DA is all about making choices - tough choices - and Inquisition will force you to choose between people. We asked JP about the nature of choices in Inquisition, and whether you could go through the game and win every situation.

"It's one thing that Mass Effect 3 did differently and it worked really well. We wanted players to be able to make these tough choices where either way, someone is going to die... or, there's a benefit but a consequence along with that. You can't sit on the fence - you're the leader of the Inquisition and there are lots of shades of grey."

There's a whole boat-load of reasons to be excited about Inquisition, and we haven't even heard anything about co-op or multiplayer yet (we asked, but no news yet). One thing's for sure, RPG fans are going to have a tough time choosing between Dragon Age: Inquisition and Witcher 3 now... you might have to save your pennies for both.