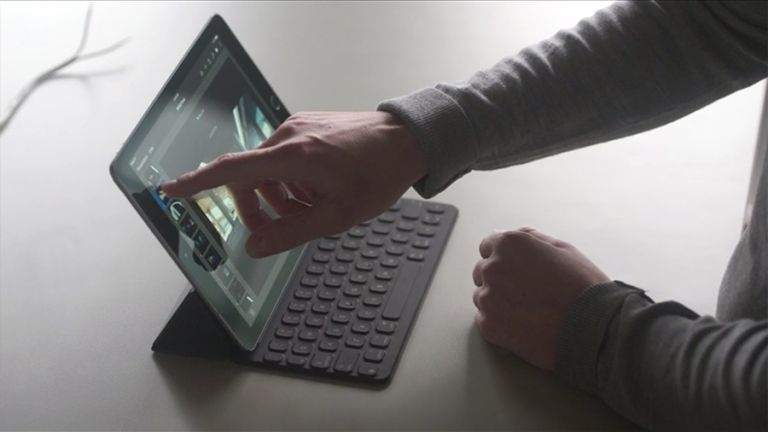 There's a new iPad in town, and its a smaller version of the iPad Pro that Apple launched in 2015. With a 9.7-inch display it matches the dimensions of the iPad Air 2, but this tablet is very much the second iPad Pro rather than an iPad Air 3, as we'll explain below.

If you're in the market for a new Apple tablet then there's a lot to consider - you can now pick from five different iPads on the Apple website - and Apple will be hoping that the newest member of the family helps to boost languishing sales of its tablet line.

Apple made much of the 12.9-inch iPad Pro's display technology last September, and it's continued the theme with the 9.7-inch model - in fact, it's one of the key features that differentiate the premium iPads from the standard ones, with colour and brightness performance that Apple says is the best around (well it would, wouldn't it?).

The newer, smaller iPad Pro does get a new feature in the form of its True Tone display: Apple says this is designed to mimic the look of paper under natural light.

It uses ambient light sensors to detect the level of light in the environment and adjust the screen accordingly - this all works separately to the new Night Shift mode arriving with iOS 9.3.

As for its looks, there's a definite iPad Pro aesthetic here, though the smaller model is about 40 percent lighter to hold than its larger sibling.

This being a Pro-level tablet, it has support for the Apple Pencil stylus, as you would probably expect - a bonus for all the creative artist types out there.

The slate also comes with support for the clip-on smart keyboards (and covers) that were ushered in with the first iPad Pro: Apple is making no secret of the fact that it wants to get Windows users to ditch their old laptops and desktops and get an iPad Pro with a keyboard... and now those potential buyers have got one more size to choose from.

The camera has been given a big upgrade over the 12.9-inch iPad Pro, with the newer model sporting a 12-megapixel camera that's as good as the one inside the iPhone 6S and the iPhone 6S Plus - if taking a photo with your tablet is considered a social faux pas, then no one told Apple.

Live Photos are supported, something you don't get with the 12.9-inch iPad Pro, but there's no 3D Touch capability on either of these iPads.

If you want to shoot 4K video on an iPad, then the new 9.7-inch iPad Pro can take care of that too.

Both iPads will be getting iOS 9.3 as of just about now, so there's nothing to choose between them as far as software goes (unless you're using an app that can really make use of that extra screen space).

The Split View and Slide Over tricks introduced by Apple in iOS 9 are both present and correct on the new 9.7-inch iPad Pro, and as usual there's support for Touch ID and Apple Pay.

3D Touch is perhaps the biggest omission as far as software goes, but as we've said this affects the whole of the iPad line for the time being.

The aforementioned Night Shift (which adjusts the amount of blue light emitted by the display late at night) is the most significant new feature turning up with iOS 9.3, but it's not the only improvement - Notes can now be protected by a password or Touch ID, and basic multi-user support has been added so students can share iPads easily.

The News and Health apps also receive minor upgrades, but there's nothing in the OS that would make you choose the 9.7-inch iPad Pro over a different tablet in Apple's line-up.

Now we're getting down to brass tacks: price.

It's worth noting that the 32GB option for the Wi-Fi and cellular tablet isn't available with the 12.9-inch iPad Pro - maybe one more reason to get the smaller one.

You can put your iPad Pro pre-order in on 24 March and units are going to start shipping on 31 March.

For a lot of buyers, the 9.7-inch model is going to be the most compelling, and it's easier to see why Apple has launched it - the tablet is smaller, more portable and less expensive than last year's iPad Pro, while keeping (and in some cases improving) all of the best features that make it a more premium product.

As soon as we get our hands on one of the new tablets we'll bring you a full review of its capabilities.