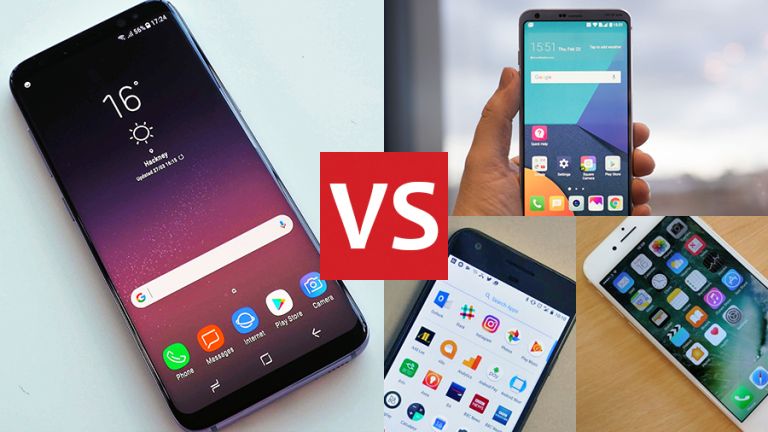 At long last the Samsung Galaxy S8 is officially out and ready to take on all-comers in the next 12 months. Samsung was of course enthusiastic about its brand new handset during the long-awaited unveiling, but is it actually as good as the company execs say it is?

Here we'll weigh up the various strengths and weaknesses of the Galaxy S8 in all the categories that matter, and see how it compares to some of the other best phones of 2017: the LG G6, the iPhone 7, and the Google Pixel. Let smartphone battle commence.

Samsung Galaxy S8 vs the rest: size and design

That screen size dwarfs the 4.7-inch iPhone 7 display and the 5.0-inch Google Pixel display, though it's only a touch bigger than the one on the LG G6. This is a phone built for people who like big, bold, hi-res screens, especially considering the work that Samsung has done in minimizing the bezels.

Samsung says its screen is just as brilliant and HDR-ready as LG's is, though the two are using different types of technology.

As for overall heft, thanks to that bezel work it's not much bigger in terms of overall chassis size than the iPhone 7 or the Google Pixel, and is just about the same size as the LG G6 - just a little narrower. At 7.1mm, the iPhone 7 is still the thinnest of the bunch here, and Apple may be able to improve on that in September.

Overall, Samsung's design aesthetics continue to wow, and if you can live with that elongated aspect ratio, it's got a case for being the best-looking smartphone out there.

Phone performance depends both on raw specs and on a host of other optimisations, but with that caveat in mind we're happy to report how these phones stack up on paper.

Inside the Samsung Galaxy S8 you get 4GB of RAM and either an Exynos 8895 or a Snapdragon 835 CPU, depending on where you are in the world - pretty much the fastest mobile chips known to man in other words.

That internal configuration beats the LG G6 and the Google Pixel (both with a Snapdragon 821 and 4GB of RAM), and may well give the iPhone 7 (Apple A10 Fusion processor and 2GB of RAM) a run for its money too - though it's hard to compare any Android handset to Apple's iPhone, because Apple can often make up the difference with internal tweaks.

As for the rear-facing camera, the Galaxy S8 has a 12MP rear snapper that Samsung promises is better than ever, and that's broadly in line with the other phones here. Again, bear in mind that specs don't tell the whole story, and we'll need to give the camera a thorough test to see how well it compares against the rest.

Finally, there's a 3,000mAh battery installed. That beats the other handsets except the LG G6, which has a 3,300mAh pack fitted - but remember that the huge, high-resolution screen on the S8 is going to be a big power draw.

Samsung Galaxy S8 vs the rest: features and software

The iris scanner is an interesting addition, first seen in the doomed Galaxy Note 7, and gives the Galaxy S8 an unlocking feature you don't get in any other of the phones we're comparing it with here.

The IP68 rating adds enough waterproofing to survive an extended dunking - though it's not quite swimproof, it beats every other phone here and is on a par with the LG G6 (the iPhone 7 offers IP67 and the Google Pixel doesn't even manage that).

Android Nougat is present and correct, as with the other Android phones here - the iPhone, of course, runs iOS - but there is a new addition in the form of the smart personal assistant Bixby (which is US only for now). Right now we'd venture to say Google Assistant has the edge, but it's going to be worth keeping an eye on Bixby in the future.

Don't forget the Gear VR capabilities as well, something only the Google Pixel can match with its own Daydream headset (the LG G6 isn't Daydream compatible).

Samsung Galaxy S8 vs the rest: the verdict

As we've mentioned already, comparing phones on paper only takes you so far, and we'll need to give the Galaxy S8 a proper run through its paces before we can deliver a definitive verdict - but there are some initial observations we can make.

First of all this is a fine-looking phone, and it looks like Samsung has built on the foundations of the Galaxy S7 to pull out another winner.

In terms of how it stacks up against the other phones here, it has internal components that are as good as or better than the competition, and a screen that may well be the best of the bunch (though LG will probably want to debate that point).

Add to that all the extras, like Gear VR support and the new DeX function that lets you operate your phone on a big screen, and it looks a very compelling proposition indeed.

Let's not forget one of the most important factors though: price. At £689 unlocked, it's a shade cheaper than the 128GB versions of the Google Pixel and the iPhone 7, but with less storage. It's a touch cheaper than the 32GB version of the LG G6 too, so we're talking the same ballpark as the other phones in our comparison.