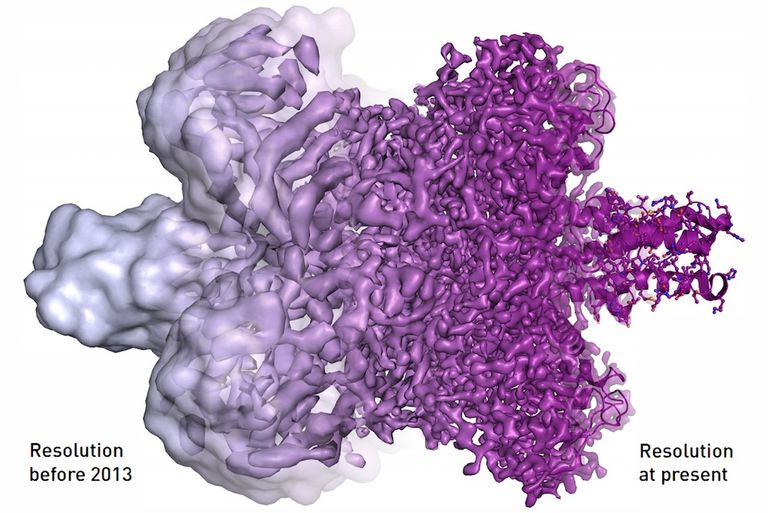 The Nobel Prize for Chemistry has been warded to Jacques Dubochet, Joachim Frank and Richard Henderson "for developing cryo-electron microscopy for the high-resolution structure determination of biomolecules in solution".

Cryo-electron microscopy has changed the way that scientists look at biology. Thanks to Dubochet, Frank and Henderson, biological molecules can now be frozen in time and imaged at atomic resolution.

Prep for cryo-electron microscopy involves rapidly chilling samples to liquid nitrogen temperatures, freezing them solid in a layer of vitreous ice. This preserves their structure and allows them to be imaged in high-resolution.

Joachim Frank developed a method to build a 3D structure from 2D images between 1975 and 1986. In the 1980s, Jacques Dubochet devised a way to prepare electron microscopy samples without water evaporating. And, in 1990, Richard Henderson used the new technology to make a 3D atomic-resolution image of a protein.

Cryo-electron microscopy has revolutionised biological imaging. Light slips past structures smaller than its wavelength, so there's a physical limit to the detail you can see with a standard microscope. Electron microscopes bypass the problem by using electrons instead of photons; these have a smaller wavelength, increasing the magnification potential thousands of times. But, it traditionally calls for samples to be dried out before they're imaged, crumpling delicate biological molecules, which are used to being suspended in water.

With this new technique, scientists can get up close and personal with complex biological molecules at resolutions that used to be unthinkable.

The Nobel Prize in Physics

One half awarded to Rainer Weiss, the other half jointly to Barry C. Barish and Kip S. Thorne "for decisive contributions to the LIGO detector and the observation of gravitational waves".

Gravitational waves are ripples in the fabric of spacetime caused by some of the most extreme events in the universe, like two black holes smashing together. Einstein predicted their existence in 1916, but it took 99 years to actually find them.

The waves were finally detected in 2015 by the Laser Interferometer Gravitational-Wave Observatory (LIGO), thanks to the combined expertise of hundreds of scientists from across the world. Three share the Nobel Prize this year: Rainer Weiss, Kip Thorne and Barry Barish.

The gravitational waves were spotted using an interferometer, which works by creating interference patterns using beams of laser light.

The laser beam is split in two and each beam is sent along a 4 kilometre-long 'arm'. Mirrors at the ends bounce them back, and they merge together back at the start.

The light should travel the same distance along each arm, cancelling itself out when it returns. But, if a gravitational wave is passing, the bends in spacetime change the length of the arms. When the light from each arm gets back to the start it is slightly out of sync, causing the beam to flicker and revealing the presence of the wave.

The Nobel Prize in Physiology or Medicine

Circadian rhythm is biology's answer to a clock, keeping animals in sync with the 24 hour Earth day. The molecular mechanism that makes it tick was discovered by Jeffrey Hall, Michael Rosbash and Michael Young.

In the 1970s, researchers  knew that a gene was the master timekeeper of the body clock, and these three scientists used fruit flies to find it. They isolated the gene, called 'period', and Hall and Rosbash found the molecule it codes for, known as PER.

PER works a bit like a molecular sand timer. During the night, it builds up, and during the day it breaks down, cycling around and around every 24 hours to keep steady time inside the cell.

Young found that a molecule called TIM, coded for by a gene called 'timeless', carries PER into the cell nucleus (where the DNA is stored), allowing it to influence its own production.