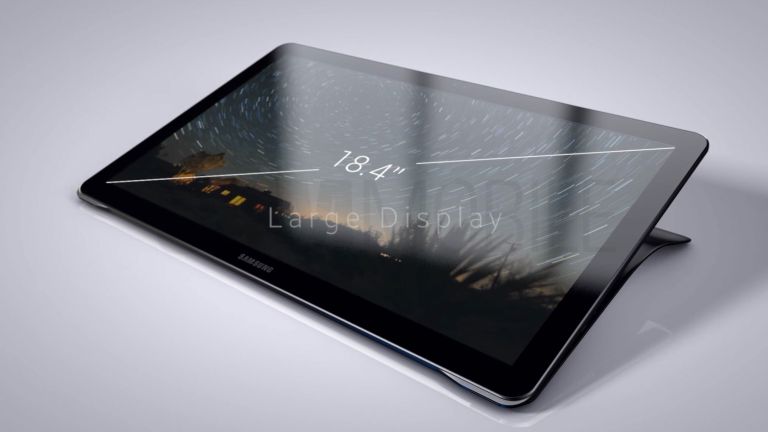 Yes that's right folks, a newly leaked Samsung tablet suggests the Korean firm is creating a slate that wouldn't even fit in the biggest of pizza boxes.

Dubbed as the Samsung Galaxy View, the rumoured slate has witnessed a number of leaks recently including a range of images which have surfaced on the web.

The leaks suggest the Galaxy View will sport a whopping 18.4-inch display, which would dwarf many people's computer monitors, let alone any tablets you may already own.

Stills from what appears to be a promotional video for the tablet were picked up my SamMobile, showing the tablet sitting in a dock/stand - because there's no way you'd want to be seen holding this beast.

Tablet with a view

Earlier leaks point towards middle of the road specs for the Galaxy View, including an octa-core processor, 2GB of RAM, 32GB of storage and a potentially confusing full HD resolution - which seems surprisingly low for a screen of this size.

There's currently no indication on when the Samsung Galaxy View may launch, but considering there already appears to be a video ad in the works it may not be too far off.

Would anyone buy it though? It's too big to take travelling, and around the home surely you'd be better off streaming to your TV or using a tablet you can comfortably hold. Let us know your thoughts in the comments below.