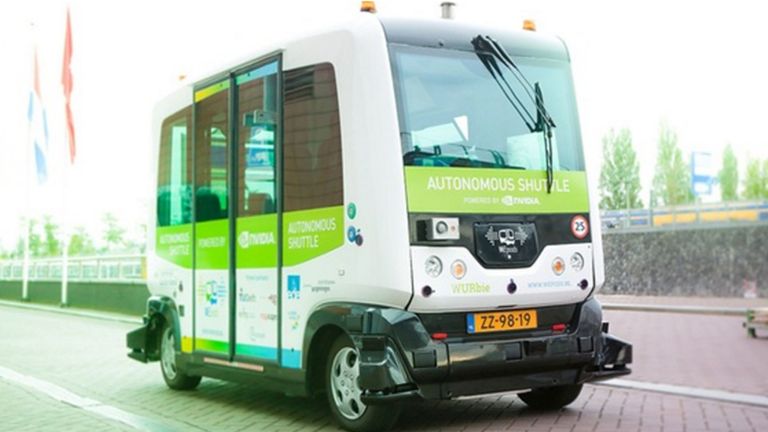 By now you're no doubt familiar with the self-driving cars being tested by Uber, Google and others, but private transport isn't necessarily where this technology is going to come in most useful - it's also set to transform our aeroplanes, trains, buses and trams too.

These modes of public transportation are much more predictable, running on set routes for much of the time, and it makes a lot of sense for autonomous tech to take the lead here. Read on for details of where these self-driving machines are up to, and how they could change travel in the future.

Trains and trams are obvious candidates for a self-driving upgrade, considering they run along fixed rails, and indeed Heathrow Airport already has driverless tram-style pods to shuttle people between different terminals.

That's just the start - there are plans to make at least some of the London Underground tube trains fully driverless within the next five years, and new trains are being built with autonomous operation in mind. Everything will be monitored and operated from a central control room, where there will be actual people working.

It's the same story in Dublin, where moves are afoot to fit self-driving technology into all new trams taking people around the city centre.

With a vehicle on tracks, the technology can be much simpler - it's just a question of moderating speed and recognising when everyone's safely on (or off) the train. There are fewer opportunities for mistakes to be made, and the routes are all mapped out in advance. The radar and image scanning tech around today can easily be installed to watch for unexpected obstructions and problems.

If you want to take a ride on a completely autonomous light rail system, head to Copenhagen, or Paris, or Barcelona - self-driving technology is already in place and it's only going to get more prevalent over time.

As for full-sized trains, there's still a way to go, primarily because of the huge stopping distances involved. Human eyesight is apparently still better at spotting problems a long way down the track than computers, so we'll be seeing flesh-and-blood drivers on the railways for some time yet.

Buses are a little trickier than trams and trains and bring up a lot of the same problems as self-driving cars. At least the routes are mapped out in advance, which means computer software can very quickly work out how to find its way - on smaller scales, it's also much easier to install road markings and sensors to help autonomous vehicles along.

Limited trials - with slow-moving buses - are already under way across the world, in countries such as Switzerland, Finland and Singapore, but for the time being these are tiny, wheeled pods that sit about a dozen people rather than the huge double-deckers you might usually think of as buses.

Take the Wepod trial that took place in the Netherlands last year, for example: the completely driverless mini-buses ventured onto public roads, capped at top speeds of 15.5mph, and could be summoned by passengers using an app.

Everything was monitored from a central control room and the pods weren't risked in bad weather or at rush hour to try and minimise potential problems. As schemes such as this one become more commonplace, we're going to quickly get used to the idea of hopping on a bus without a driver at the wheel.

So what about the actual buses we're all travelling on today? For the time being, no one is talking seriously about getting rid of drivers in the near future - a whole host of technological and regulatory hurdles need to be overcome first. For now, self-driving buses are very much limited to small-scale experiments.

However, once they do arrive, they'll bring plenty of benefits with them - experts estimate autonomous buses will be able to travel at a decent speed just six feet apart from each other, helping to clear the rush hour jams and keeping traffic flowing. No word yet on whether three will turn up at once though.

The thought of getting into a self-flying plane might fill you with dread, but the truth is autopilot technology already plays a big role in modern aircraft. That's not to say the human beings sat in the cockpit aren't highly skilled, but automatic controls can take care of a lot of the basics of flying, if the pilots want to make use of them.

As with self-driving cars, putting computers in control would cut out the possibility of human error or deliberate sabotage, but it comes with its own set of problems.

Despite all our faults, humans are still better than computers at dealing with unexpected situations and improvising accordingly - it's not clear whether an automated system would've been able to land on the Hudson River, for example.

As Google's Project Wing suggests though, these autonomous aircraft will undoubtedly be carrying supplies and cargo long before they're taking people through the air, so there's plenty of time to perfect the technology. Even today, you can buy yourself a personal drone that happily avoids obstacles on its own, and automatically returns to base when it's low on battery.

"There is no doubt in our minds that we can solve the problem of autonomous flight," Boeing's chief technology officer John Tracy said last year. "It's a question of certification procedures, regulatory requirements and, even more significantly, public perception."

That's the crux of the matter: while a lot of the technology is already in place to let planes control themselves, it could be a long time before passengers are ready to give them a try. In the meantime, we can get used to autonomous drones dropping off our deliveries.