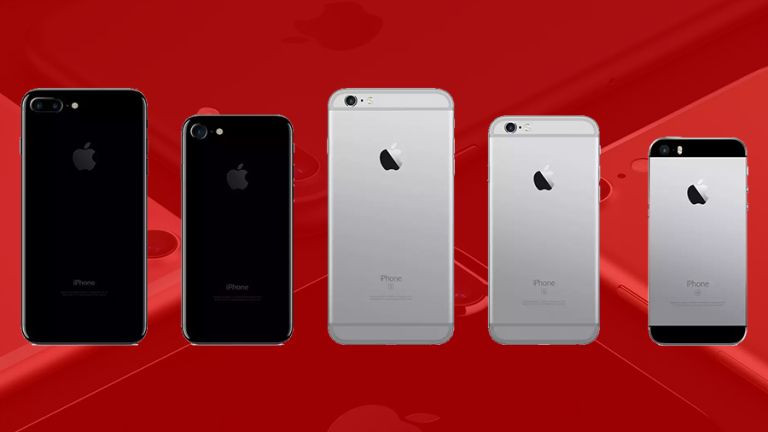 Amid all the hullabaloo about the iPhone 7 launch, don't forget that Apple is still keeping its older models on sale alongside it too - in fact if you head to the Apple website today, you've got five different iPhone models to choose from. So which is best for you?

There's a few different factors to weigh up and they're not all immediately obvious. We'll talk you through the specs, prices and other considerations to bear in mind so you have a better idea of which one to pick (at least until the iPhone 8 comes out in September 2017).

The latest and greatest iPhone, only a month old and featuring everything Apple's engineers can come up with.

New to the iPhone 7: waterproofing, an improved camera, the super-fast A10 processor, and the choice of a jet black colour which is apparently very easy to scratch. And of course there's no 3.5mm headphone jack.

It's worth mentioning the camera too - Apple says its re-engineered camera takes better photos than ever, especially in low light, and for the first time Apple has included optical image stabilisation in the smaller model as well as the larger one.

Design-wise it's not a huge leap from the 2016 edition, but if you want the very best that Apple has to offer in an iPhone, this is it.

A good choice if: you want the best specs and camera on an iPhone.

For the third year straight you have the option of a bigger, 5.5-inch model, and in 2016 that's the iPhone 7 Plus.

You get everything mentioned above, all wrapped in a larger chassis and with a bigger display that ups the resolution to 1920 x 1080 pixels. There's a larger battery too, though that has to be balanced against the larger power draw of the display.

As usual, you get a better camera if you upgrade to the Plus model. This time around that means two lenses, a wide-angle 28mm f/1.8 lens and a telephoto 56mm f/2.8 lens that gives you optical zoom for the first time on an iPhone - a whole 2x zoom.

You can also use the dual-camera system to create different depth of field effects.

All this comes at a cost, of course - the iPhone 7 Plus starting price is £120 (or $130) higher than its smaller counterpart.

A good choice if: you want the biggest and fastest iPhone available with the extra capabilities... and you don't mind the steep price.

In terms of most tasks you're going to do on your phone, the iPhone 6S isn't all that slower than the iPhone 7. It's slower, definitely, but you're only going to notice the difference on the most intensive apps and games.

Your phone won't be waterproof, and the camera isn't quite as impressive, though it's still very good (see last year's iPhone launch for details). Considering it does have a 3.5mm jack, though, it's a sensible choice if you own some expensive headphones.

Design-wise, there's not much to choose between the 2015 and 2016 handsets. Both run iOS 10 and support Force Touch, so in terms of software the phones are identical.

A good choice if: you'd like to save yourself some money and already have an expensive set of wired headphones.

If you go for last year's iPhone 6S Plus over this year's iPhone Plus 7, you save even more than with the regular models - £120 (or $120) to be exact. But with the camera enhancements on board the Plus 7, the differences in that department are greater than they are on the two 4.7-inch models.

You also get the older A9 CPU inside although this is still a phone that's going to be more than fast enough for everything you want to do with it.

Why would you pick it over the iPhone 6S then? Extra screen space, a higher 1920 x 1080 resolution, and a few handy camera features like optical image stabilisation. Otherwise the two 2015 handsets are very much the same.

A good choice if: you want a 5.5-inch iPhone but you don't want to pay top price and you can live without the best camera features.

The iPhone SE is the odd-one-out in our list but it actually has the same internal components as the iPhone 6S and the iPhone 6S Plus. It has a slower Touch ID fingerprint sensor, and doesn't have the optical image stabilisation of the Plus, but otherwise the specs are pretty much identical, right down to the number of megapixels in the camera.

There's a 3.5mm headphone jack there too, if you need it.

The big difference is of course the design, which harks back to the iPhone 5 of old. You get a 4-inch screen running at a 1136 x 640 pixel resolution, and a phone you can use comfortably with one hand rather than two.

The storage options aren't the best, with just 16GB and 64GB models on offer, but on the plus side this is the cheapest iPhone you can get straight from Apple at the moment. In fact you can get two 16GB iPhone SEs and a lot of change for the same price as a 256GB iPhone 7 Plus.

A good choice if: you want an iPhone on a budget, or you love the way iPhones looked back in 2013.