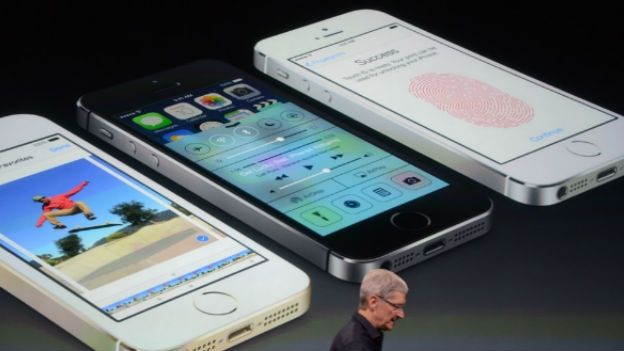 Apple has officially unveiled the iPhone 5S as the company's new flagship smartphone, with new features including a new A7 processor and a fingerprint scanner built into the home button

Apple CEO Tim Cook unveiled the iPhone 5S on stage at an exclusive launch event in Cupertino tonight. The new iPhone will take over from the iPhone 5 as Apple's flagship handset and continues the "S" trend started with the iPhone 3GS in 2009.

Many of the rumours proved true, with the iPhone 5S sporting a fingerprint scanner built into the now-circular home button, as well as an improved Apple A7 processor.

The fingerprint scanner, called Touch ID by Apple, can be used instead of the traditional passcode to unlock the phone or purchase apps from the App Store.

"Built into the home button, Touch ID uses a laser cut sapphire crystal, together with the capacitive touch sensor, to take a high-resolution image of your fingerprint and intelligently analyze it to provide accurate readings from any angle," says Apple's press literature.

The fingerprint scan is stored inside the CPU on the iPhone 5S and never uploaded to Apple's servers or sent to iCloud. Article continues after the video

According to Phil Schiller, Apple's senior vice president of Worldwide Marketing, the iPhone 5S is: "The most forward-thinking smartphone in the world, delivering desktop class architecture in the palm of your hand."

That's because the 5S will launch with iOS 7 but, unlike the iPhone 5C, will be running it on a 64-bit chip architecture courtesy of the new A7 processor.

It's the first time a smartphone has used a 64-bit chip and the result is a 40x CPU performance bump and a 56x improvement in the graphics department over the iPhone 5. As if to prove this last point, a demo of Infinity Blade III was shown off at the event.

As with previous "S" models, the chassis hasn't changed from the iPhone 5, although Apple will now be offering a gold option alongside the slate and silver designs.

Made of high-grade aluminium, this is the premium answer to the polycarbonate casing of the also-announced iPhone 5C.

Cupertino has also loaded in a few well-known photography features such as Burst Mode and Slo-Mo at 120fps with iOS 7 automatically scanning the images and presenting you with the best one.

The rumoured dual-LED flash also proved true with iPhone 5S able to use either a cool, white flash or a warm, amber one depending on the type of shot you're taking.

No mention was made of the much-rumoured NFC connectivity during Apple's event this evening, but the company did reveal both pricing and release date information.

We'll be bringing you a full review of the Apple iPhone 5S as soon as we get our hands on one.