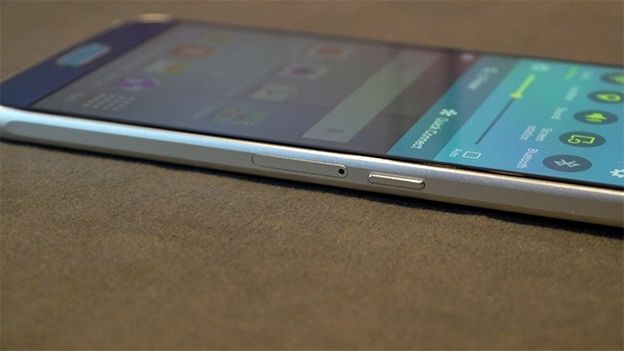 Rejoice! Samsung has ditched the slimy plastic and kitted the brand new Galaxy S6 out with swathes of metal and glass. But, how else does the Samsung Galaxy S6, and the curvy Galaxy S^ Edge, differ from the S5?

While the dust is still settling on HTC's announcement and the new One M9, Samsung has just unleashed not one, but two flagship smartphones upon the world - the Samsung Galaxy S6 and S6 Edge.

While the headlines will be direction at the new design ethos Samsung has taken, it's far from the only improvement this year. So, read on as we compare the Samsung Galaxy S6 and S6 Edge to the outgoing flagship, the Galaxy S5.

A note about the S6 Edge

Alongside the Galaxy S6, Samsung also used the MWC event to show off the Galaxy S6 Edge. A bit like the Note 4 Edge, the latest curved display toting device from the Korean company has 'edge's to both sides of the screen, not just one. Aside from the display, both the S6 and S6 Edge have mostly the same internals.

All about that build

We all hoped it was coming, but it's now been confirmed - Samsung has ditched the plastic.

While the S5 was a flagship device with a distinctly mid-range design, the S6 and S6 Edge really excel in that department. Gone is the pinholed back, the faux metal rims and creaky feel, replaced by a fully Gorilla Glass 4 front and back and a metal rim.

It's a massive improvement over the Galaxy S5 in almost every area. What's more impressive is that Samsung has managed to shrink the device down, fitting the 5.1-inch display into a much smaller body than the S5. It's thinner too, at just 6.8mm for the S6 and 7mm for the S6 Edge, compared to 8.1mm of the S5.

But, with this move to a new design ethos, some things have been lost along the way. Say goodbye to the removable battery, adiós to the MicroSD card slot and auf widersehen to the IP67 waterproof rating. We know some of those might not go down to well with Samsung enthusiasts.

Just like the Korean company did with the Note 4, Samsung has kitted both new models of the S6 out with a QHD display, leaving the 1080p panel of the Galaxy S5 trailing in the dust.

Combine that QHD resolution with the fairly small 5.1-inch display and you've got yourself a whopping ppi of 577, a marked improvement over the 432ppi boasted by the S5.

Both the S6, S6 Edge and S5 use a Super AMOLED panel, which produce bright colours and inky blacks. Obviously with the S6 Edge you get the added real estate of the edges, which Samsung will kit out with special apps.

Slimmed down, powered up

Samsung used to sell a flagship on the sheer amount of added extras bundled into the device, but that's not completely true this year.

Unlike the S5, with the Galaxy S6 and S6 Edge Samsung has streamlined the whole process, killing off novelty features and focusing on all the important bits.

The shoddy fingerprint swiper from the S5 has been turned into something much more inline with TouchID, so you just press you finger down on the home button to unlock the device. Fitness is still key for Samsung, as the HRM has been kept, though in a slightly new position. We'll have to spend more time with the device to see if it offers improved accuracy.

One of the biggest differences for the 2015 models is the choice of processor. Whilst the Galaxy S5 utilised Qualcomm's Snapdragon 801, the S6 and S6 Edge ditch that and instead use Sammy's own octa-core chipset. The RAM has also been upped from 2GB to an impressive 3GB.

To combat the loss of the MicroSD card slot which let you improve the basic 16GB storage on the Galaxy S5, the S6 and S6 Edge come in three flavours - 32GB, 64GB and 128GB. So choose wisely, or you might regret it.

Instead of upping the megapixel count, it's still 16MP like the S5, Samsung has instead focussed on improving the tech inside the snapper.

The f1.9 aperture should drastically improve low-light shots and use you can use the HRM on the back to capture selfies. Speaking of selfies, the front facing camera has seen a nice improvement, upped from 2MP to 5MP.

If there was one area that has left us a little concerned when comparing the S5 and S6/S6 Edge, it'd be the battery. We've already mentioned that with the move to a metal and glass design has seen the loss of the removable battery, but the battery has also been shrunk, dropping from 2,800— mAh to 2,550 mAh (2,600 mAh on the S6 Edge).

When you consider that this smaller battery has to run a much more powerful QHD display, that number becomes a little worrying.

Samsung has finally done it. Finally ditched the plastic and created a phone that's not only powerful, but pretty damn sexy too. It improves, specs-wise anyway, on almost every area of the Galaxy S5, though a few stalwarts, notably the MicroSD slot and removable battery, have been lost in the shake-up.