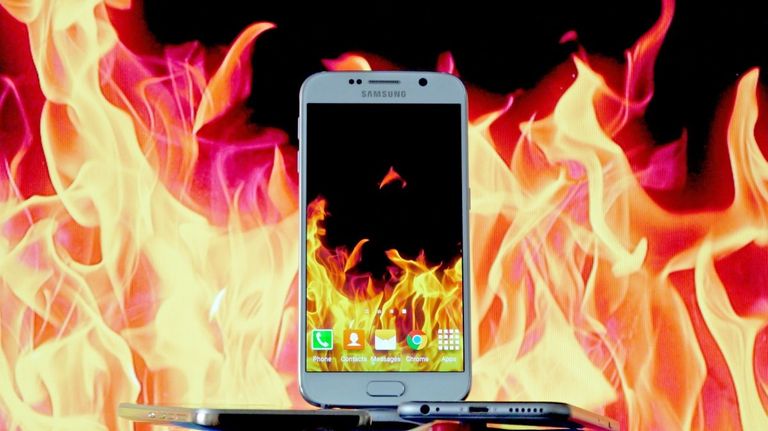 The OnePlus 2 has just been launched and looks set to be a real flagship killer, bringing a formidable combination of top-of-the-range specs, great design and an incredibly low price. It's a class act that builds on a lot of what we loved about the OnePlus One, and it's sure to make its competitors quake in their boots.

However it's not a good old fashioned T3 smackdown without a decent fight, and in the opposing corner we have the Samsung Galaxy S6. This sexy slab of smartphone is quite possibly the best flagship handset you can currently buy, and if OnePlus is serious about competing with the best of the best, then the Galaxy S6 is the phone to beat.

One thing that the OnePlus 2 has going for it straight away is the price, as at just £289 it offers amazing value for money, considering that the Samsung Galaxy S6 goes for the more wallet-unfriendly price tag of £559.

Despite its relatively low price tag, the OnePlus 2 brings a high-end aesthetic to the table, with a lovely aluminium-magnesium alloy frame that wraps itself around a soft Sandstone Black back cover.

A Henry Ford-esque approach of you can have any colour you like as long as it's Sandstone Black might be disappointing to some who like a bit more choice in the hue of their handset, but OnePlus makes up for this with a range of different customisable covers that includes Kevlar, Black Apricot, Rosewood and even Bamboo.

However, the one major blight on the OnePlus 2's design is that it feels a little chunky at 9.9mm thick.

Meanwhile Samsung has obviously been stung by comments that its older handset, the Galaxy S5, came with a rather uninspiring – even downright ugly – look, so it's pulled out all the stops with the Galaxy S6.

We're talking about a complete design overhaul that ditches the cheap plastic feel for a premium metal and glass chassis that oozes class.

A number of colour variants makes it a more versatile smartphone than the OnePlus 2, and a thinness of 6.8mm makes it a much more svelte and comfortable handset to hold.

The S6's Achilles heel in the design stakes, however, is that the case is a veritable fingerprint magnet. Otherwise, we have to give kudos to Samsung's designers for creating a gorgeously-designed phone.

The OnePlus 2 comes with a stunning 1080p 5.5-inch screen – which OnePlus claims is one of the best displays on any smartphone for using in bright sunlight.

It also packs in a bulky 3300mAh battery to keep the handset powered throughout the day, as well as dual-SIM card support and 4G LTE capability. We're not ones to often get excited about cables, but the OnePlus 2 features the new USB Type-C port (also found on the new MacBook) which will make it charge in a flash, as well as move photos, music and movies on and off the phone more quickly.

The Samsung Galaxy S6 goes for a slightly smaller screen size at 5.1-inches, but it packs a whole load of extra pixels, with a QHD resolution of 1440 x 2560. Combined with Samsung's Super AMOLED technology, the S6's screen is sharper and more vibrant than the OnePlus 2's.

The S6 also includes a lovely 16MP camera that makes taking snaps with the smartphone a pleasure, and it's packed with features and settings to help you compose the perfect shot.

The S6 doesn't have as big a battery as the OnePlus 2's, however, with just a 2550mAh capacity which means S6 owners will be left dashing for a charger while OnePlus 2 owners keep on going.

Both the S6 and OnePlus 2 also feature fingerprint scanners, which makes securing and unlocking the handsets quick, easy and dependable.

Perhaps the most impressive thing about the OnePlus 2 is that it manages to pack some of the latest and most powerful components into such a great value package. We're talking about hardware usually seen in flagship smartphones that are often more than double the price, and it comes with a huge 4GB of RAM and a 64-bit 1.8GHz Snapdragon 810 octa-core processor.

On the other hand Samsung has included its own octa-core processor that runs at both 1.5GHz and 2.1GHz speeds, depending on the cores used. It also features 3GB of RAM, which isn't quite as much as the OnePlus 2, but more than enough for most.

This means that both handsets are pretty much equal when it comes to sheer horse power – and you'll be getting a fantastically smooth and responsive experience no matter which device you go for.

However the fact that the OnePlus 2 delivers a comparable amount of performance to the S6, despite being a lot cheaper, means that we have to hand this round to OnePlus.

The OnePlus 2 runs OxygenOS, which might sound unfamiliar but actually delivers a very close experience to Android 5.1 Lollipop. It also comes with a number of tweaks that makes usability better, such as on-screen gestures to launch apps.

For example you can draw an 'O' shape on the screen to launch the camera, while a 'V' shape turns on the flashlight.

Meanwhile custom sound colours, accent colours and LED notifications help you customise the phone to suite your tastes, while also making it easier to use.

OnePlus has also been quite restrained in the amount of apps it preinstalls on the OnePlus 2, which helps OxygenOS feel tidy and uncluttered. You can also install any Android app on OxygenOS, so you don't need to worry about missing out.

The Samsung Galaxy S6 brings a more straightforward version of Android 5.0.2, but with Samsung's own TouchWiz user interface on top. This interface can be a bit hit and miss, but Samsung has worked hard to refine the look, giving it larger and flatter icons, as well as reducing the number of menus and ditching a lot of the clutter found on previous handsets.

This makes the Galaxy S6 nice and simple to use, with the settings icon bringing you your most used settings on top, with the rest below. It's little touches like this that makes the S6 the most usable Samsung smartphone to date, though the OnePlus 2's gestures gives it a slight edge in the usability stakes.

This has been one of the closest – and most fiercely fought – smackdowns we've ever run and both sides have put up an incredible fight. The Samsung Galaxy S6 is an absolutely amazing flagship smartphone that takes everything that's great with modern handsets and wraps it up in a gorgeously designed package.

It's certainly a premium phone, and it comes with a price tag to match. This is where the S6 shows its weakness and allows the young upstart OnePlus 2 to land a few knock-out blows.

This is because the OnePlus 2 offers brilliant value for money. Sure, it's not the cheapest handset in the world, but the high quality components crammed into its frame makes it a handset that can go head to head with some of the most expensive handsets on the market.

Ultimately the choice between the two handsets is clear; if you want a beautifully designed and built smartphone that makes a statement every time you take it out from your pocket, then the Samsung Galaxy S6 is for you.

However if you want a powerful and innovative phone that doesn't come from a big brand name, but offers amazing value for money, as well as enough strength to make it last a good few years before feeling outdated, there's only one choice: the OnePlus 2.