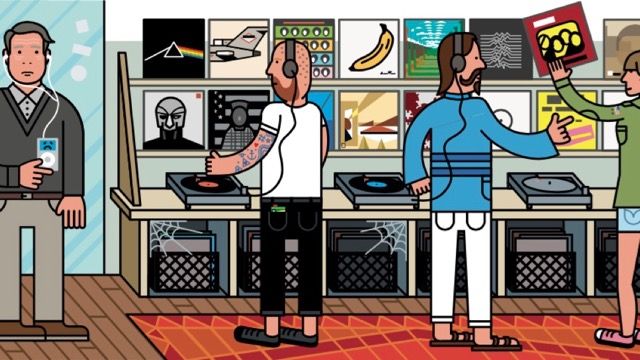 This month's questions: Should I get hip to vinyl, daddio? What MAMIL bike kit do you recommend? Can tech make my breakfast better? Is it OK to use pod coffee machines? When can I make all of my kitchen smart? I want to start a record label. Help me!

Q. I hear that vinyl is back. Should I get hip to it, daddio?

It's back again? GaGu is old enough to recall vinyl's last proper resurgence, during the heady rave days of 1992. Although, to be honest with you, he can't actually remember all that much about the era. But he does remember frantically trying to source that rare, DJ-only promo version of Lick A Gunshot Bwoy by MC Badman featuring Shaniqua.

Even though record players have long been championed by audiophiles – a group of people he finds about as much fun to talk to as Jehovah's Witnesses – Guru will admit to getting a warm, fuzzy feeling from seeing great cover artwork spread out across a 12-inch album cover, instead of being crammed into 100 or so pixels; then pulling out a record and enjoying that crackly, analogue ambience. At that point, he stops and goes back to his NAS full of digital tunes.

But if you want to take the plunge, or revisit a once-beloved selection of records now quietly mouldering in the loft, Guru has some good tips for ya.

GaGu's favourite vinyl tech for utter noobs is the Crosley range of portable decks. With built-in speakers and prices from 40 quid, we're clearly not talking an orgasmic sonic experience here. However, go for the top-of-the-range one (£150) and you've got a decent enough deck that has USB for ripping vinyl to MP3, and a headphone out so that you can attach a better speaker.

Looking to get serious? There are plenty of turntables that have been around for years – from the likes of Pro-Ject, Rega et al – that are thoroughly proven. Guru is also rather taken with VPI's Nomad. Billed as “the first all-in-one, high-end, entry-level turntable”, it has a built-in headphone amp for private listening, as well as a phono stage so that you can plug it straight into any speaker or amp.

Q. I want to be a MAMIL. What expensive and mad-looking bike kit do you recommend?

Listen, Guru isn't one for donning man-made fibres and shoes that make you sound like a horse when not clipped into your bike. GaGu prefers to cycle as nature intended: in a pair of white shorts and a Frankie Says Relax T-shirt from 1983. While smoking a fag.

However, he has respect for those who wish to all but meld with their £4,000 bike, while looking like an explosion in a paint factory. For these men, technical bragging rights are of the utmost importance.

First off, GaGu heartily recommends the Endura FS260-Pro SL Bibshorts. Endura's gear is all good, as it happens, but this sporty black and white unitard is quite spectacular… if you have the, ahem, balls to wear it. To acquire one, Guru had to go to a special shop (Cyclefit in London) and have his arse measured by a special machine. Yes, that really happened.

The outfit is available in three different 'butt-pad' (not the correct terminology) widths, and the righteous arse-measuring is all done via Endura's 'gebioMized Pad Fit System', which tailors awesome bum-paddage to your “physiology, riding style and saddle”. Oh, yeah: you have to take your saddle along to the shop, too. Guru nearly forgot that bit.

Need some shoes? For best results, these should be custom-fitted and ideally from a brand like Bontrager or Fizik. Guru's MAMIL friends insist that your shoes, and how they fit both your foot and the pedal, are perhaps the most important part of a bike's set-up, apart from maybe all the boring stuff like frame and gears and such. Insoles should be custom-moulded either to fit your foot or to correct any physical issues your plates may have.

Then you'll need a helmet, and Guru loves Casco's Speed range of skid lids. Great at protecting your bonce, they're also as streamlined as a very fast fish. But mainly, he loves how they look like something a starfighter pilot would don.

Q. I have no time for breakfast. Can tech start my day better?

Guru once developed a serious McDonald's bacon and egg McMuffin habit. This was ultimately bad for several reasons. First, it saw him balloon to three times his fighting weight. Second, it was costly (he was scoffing several a day). Third, it involved actually having to go to McDonald's. GaGu also stank of meat fat on a daily basis. Mmm, tasty.

But there's a happy ending to this story: Guru solved problem #1 through bench-pressing big logs, and salvation from problems #2 and #3 came from the Hamilton Beach Breakfast Sandwich Maker (at John Lewis soon).

This feat of culinary genius has a trio of housings. In the first part, you sit the bottom portion of a muffin or bagel, or a slice of bread, topped with cheese and pre-cooked meat. Above that is a mini hotplate upon which you crack your egg. On the third tier, you sit the top of your muffin or bagel, or another slice of bread. When the egg is cooked, the hotplate pulls out, leaving you with a perfect brekkie muffin.

Q. Is it okay to use pod coffee machines?

GaGu doesn't want to sound like a Nazi about this, but nein! Schweinehund! Guru is no eco-hippy by any stretch of the imagination, but he knows it's impossible to justify both the waste and the expense involved with pod machines. And while they can make passable black coffee, the capsules for milkier drinks often taste like crappy artificial sweetener mixed with coffee and a dash of baby's sick.

GaGu's advice? Spend a lot of money on an espresso machine (the cheaper ones struggle with extraction, and they froth milk about as well as someone farting in it) or spend way less on a pour-over filter or cafetiére. Add a monthly sub to online coffee vendor Pact.com and you're laughing.

Q. Guru! When can I make all of my kitchen stuff smart?

GaGu can actually put a date on this: the end of September. Well, so long as you want all of your appliances to be made by Hoover. The company has boldly leapt in where angels fear to tread, bringing out a Wi-Fi-connected oven, hob, fridge freezer and hood, plus a range of washing machines and dishwashers.

The Wizard range can be controlled via an app (Android 4+, iOS 7+), as well as a desktop app for your PC. So you'll be able to receive alerts (“I've burnt your dinner again! Hehe!”), turn things on and off, and monitor energy usage. Welcome to the future, chums.

Q. I want to start my own record label. Any tips?

It's a thorny subject, the music business. When GaGu's prog-rock band, The Fist Of Destiny, folded in the early Eighties, it was largely down to a lack of label support. Well, that and the hotel-room incident with the pink octopus (*cough*).

Liz, you're probably thinking, “If only I could buy a sort of 'record label in a box', that would make things easy.” Well, brace yourself, 'cos now you can! Record Label In A Box from Ditto Music is a box (natch) containing Management Suite software for your planning and finances. The service also includes mentoring, a Web domain and registration as a limited company and with PPL (so that you can get paid royalties). Oh, and there's a pen with a USB stick with all your label data on.

Now go out there and rock! (In a financially responsible manner.)

The Monitor Audio Airstream range is one of GaGu's favourites in the wireless music-streaming realm. The latest addition is the S150 (£150), which is a Bluetooth aptX number ready to serve up 40 watts of the purest jazz-funk from its 'wonky chimney' form.

GaGu has been hands-on with the Marshall London music phone (£399, below), and it's strong. Branded in the rock-amp maker's black leather and metal style, it's a passably good Android Lollipop phone – and the music-player part of it sounds really good. In fact, despite the lack of support for HD audio, it makes most phones sound cack. It lacks a bit of the old Spinal Tap “it goes up to 11” volume but, as a Marshall spokesperson admitted, “If we make it too loud, maybe we get sued.” Rock and roll!

Gadget Guru gets furious if his milk is overheated, so he thanks Odin for the Dualit Cino Milk Steamer (£200). With a thermometer, a powerful steam jet and a one-litre water tank, it froths the living crap out of any milk, abetted by an 850ml jug with “the ideal shape and lip to help create perfectly frothed milk”.

Sunglasses of the month? Is there such a thing? Anyway, the Silhouette Titan One (£TBC) shades are rather nice. They're made from one piece of titanium (and some glass) for flexibility and strength. They also look fly when sat upon Guru's face, which has been likened to that of a young Tony Curtis [Bollocks! – Ed].

Are you an athlete or sportsperson in need of special pants? Well, 2UNDR is the techiest form of undercracker currently available. They utilise something called Coldskin by Garmatex, with “crushed jade minerals… woven into the fabric to promote cooling in areas where heat commonly builds during activity”. Such as, for instance, your old fella or bum crack.

Finally, Gadget Guru has a heads-up for the hedonists among you: FIXR (iOS, Android) is the Airbnb of clubbing. It lets you find nightclubs, bars and gigs near and far, and buy tickets in advance or on the door. You can also use it to sell tickets to events, helping Guru to achieve his dream of becoming the next Peter Stringfellow.

OK, Gagu, convince me to buy a smartwatch.

No problem, mate: buy a f**king smartwatch or I'll kill you with my thumbs. Oh sorry, you meant through reasoned argument? GaGu must've been having one of his flashbacks to his days in the SAS, which he doesn't like to talk about.

You're scary, but these watches don't seem useful.

While Guru agrees to an extent, smartwatches offer a load of minor life hacks and upgrades that, when put together, are quite impressive. The main one? Notifications.

Come off it, Gagu, we all know about notifications!

Ah, but it's not just about messages and diary alerts flashing up on your wrist. Guru is easily distracted and – oh look, it's a bird-shaped drone!

You see what I mean? Now, with notifications on a smartphone, it's so easy to get sucked into all of the delights your mobile has to offer, when all you really want to do is check to see if the plumber has called, having kept you waiting indoors for six hours. With a smartwatch, it's all there: you can interact or ignore, then get on with your life. Oh look, another drone!

Yes. On Android Wear in particular, the voice control is pretty damn good. Chatting to a smartwatch is among the least embarrassing forms of talking to an inanimate object.

What can you tell it to do?

Find the nearest butcher; message my aunt; show me a picture of Jim Bowen; remind me to have a shave tomorrow. You know, the kind of stuff you'd normally get a PA to do.

Yeah, with the Apple Watch you can now pay for goods. So trust GaGu: smartwatches are pretty cool.