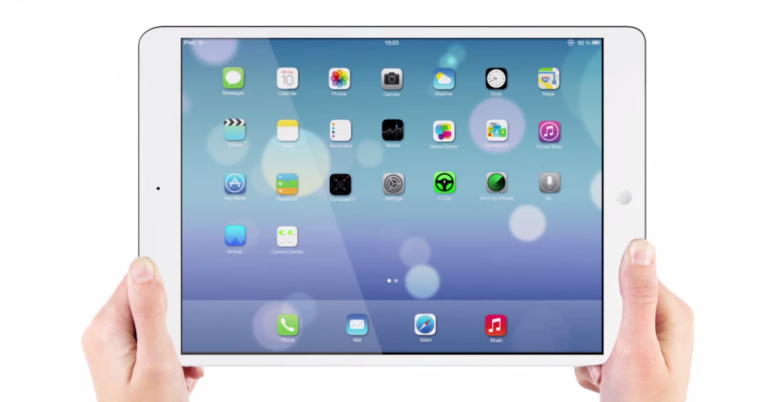 Revealed at Apple's event in San Francisco, the iPad Pro has a 12.9in screen that offers 78% more area than the original iPad and 360 times more graphics-pumping power behind it. There's a large number of pixels in that screen too, 5.6 million - more than in the screen of a 15in MacBook Pro with Retina screen - taking the custom timing controller from the recent 5K iMac to handle it all.

The width of the new screen is the same as the height of the current generation iPad Air 2.

Inside the iPad Pro there's a new A9X CPU that's 1.8 times faster than the A8X chip seen in the iPad Air 2 and delivers twice the memory bandwidth.

Despite being only a tiny bit thicker than the Air 2, the extra screen area means there's space for a larger battery, leading to a claimed ten-hour battery life - enough to keep you going all day.

Four speakers supply the audio, in a configuration that can automatically adjust to the way the iPad is held.

New accessories announced are the Smart Keyboard, which connects through a brand new interface that transfers power and data through a magnetic link. The Apple Pencil was also shown, a pressure-sensitive stylus that communicates position and angle data to the iPad Pro for artists to simulate a range of creative media.

iPad Pro will be on sale in November, with prices starting at $799 for the 32gb model.

Here's what we predicted a week ago:

What is the iPad Pro?

The iPad Pro, known in some circles as the iPad Plus, is essentially a larger iPad. Most rumours agree on the same 12.9" screen size (diagonally from corner to corner) which is quite an upgrade on the 9.7" display currently attached to the iPad Air 2. With both existing iPads now differentiated by their "mini" and "Air" labels, the stage could be set for Apple to add a third string to its iPad bow.

That was until September, when reports began to tip the Apple iPad Pro for an unveiling alongside a pair of new iPhones at Apple's September 9th event with sales kicking off in November. We do stress that this is by no means confirmed by Apple and it's still a case and keeping fingers crossed that we'll even see it all.

We're already mentioned the 12.9-inch screen but even this isn't set in stone: other sources think a 12.2-inch display size is more likely. Most reports agree that the iPad Pro is going to be very, very thin, and come with two additional speakers and one extra microphone for improved audio capabilities - better sounds recordings out in the field, perhaps?

There are some whispers within the industry that Apple wants to set up the iPad Pro as an Apple Pay terminal: not to make payments but to receive them (from the iPhone and the Apple Watch). In fact the whole device seems to be aimed at business users rather than consumers, of which more later.

Industry insiders say the iPad Pro will have the same Force Touch technology built into the Apple Watch (that reacts to the pressure of your presses) and there's also talk of a Bluetooth stylus being included as well. There have been some rumours that the big tablet will run a hybrid OS X-iOS operating system, but that seems far-fetched.

The iPad has been the damp squib in the last few Apple earnings reports: consumers aren't upgrading their tablets as fast as they're upgrading their smartphones, and with the iPhone getting bigger, it's not altogether clear exactly what benefits a tablet can offer any more (if indeed it was ever clear in the first place).

A larger iPad would not only give it some breathing room away from the iPhone but it would also give Apple the opportunity to grow in an as-yet-untapped market: business and enterprise. Last year Apple CEO Tim Cook inked a deal with IBM to improve his company's chances of getting iPhones and iPads into the workplace.

At WWDC this year we saw Apple showing off some new iOS 9 features unique to the iPad, like the Slide Over option that lets you pull in a separate sidebar app, or the Split View feature where you can run two apps side by side. It's obvious that Apple is thinking long and hard about how it can make the iPad a compelling device again.

Why it's not likely to happen

Despite everything we've written above, the iPad Pro is by no means guaranteed to show its glass face later this year. Just because Apple is thinking about a product doesn't mean it's actually going to launch (see also: the Apple television set) and with two sizes of iPad already on the market the company may not want to rock the boat too much.

The iPad Pro could tempt people who wouldn't have otherwise bought an iPad, but then again it could take sales away from the iPad mini and the iPad Air. It's also going to be very expensive - the iPad Air 2 already goes up to £659 for the most expensive model - and unless Apple is certain that it's going to shift in significant numbers it won't take the plunge.

Then there's the new ultra-light and ultra-thin MacBook, which is almost an iPad with a keyboard - except with the added power and flexibility of Mac OS X. Apple may decide to direct its attentions towards this device rather than bringing out a larger iPad that does more or less the same job.

Liked this? Now why not read Apple Music: in tune or a bit of a racket? or our guide to the best smartphone