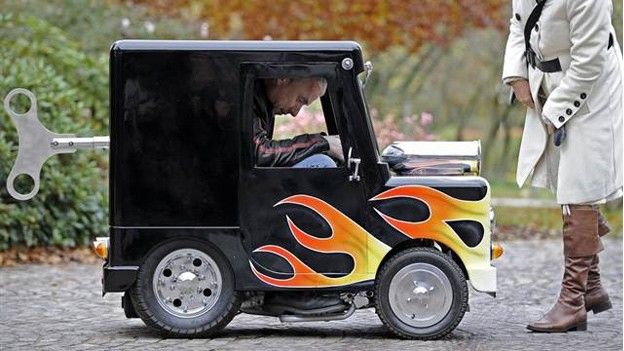 It's Friday yet again, which means it's time to take a quick look over the more eccentric side of tech's last seven days. Here's what won't be on the front pages...

We have another look at some of the weirder stories that graced the internet over the past 7 days that you probably didn't see.

Lab Grown Burger
A vascular biologist from the Netherlands is planning on growing his own burger in a laboratory. Mark Post plans on creating his burger by assembling thin layers of muscle strips which are created from stem cells harvested from leftover material from slaughterhouses. It's estimated this experiment will cost around £214,000. We'll stick to the cheaper fast food restaurants.

Odd X-Rays
A forensic scientist has written a book that displays the many weird and wonderful objects that have been found stuck up patients' orifices when having an X-Ray. Some of the things found have been an iPod, a cassette tape and even a Buzz Lightyear doll. Perhaps that's where the phrase 'to infinity and beyond' comes from.

World's Biggest QR Code
Betfair are at it again. Last week we reported on how some football players had a QR code shaved into the back of their head. This time they've made the world's biggest code made entirely of footballs. But this code can only be scanned from the air; a couple of skydivers used their smartphones whilst travelling at 130mph to place the world's first mobile bet in the sky. More than 2000 balls were used and €500 went to charity.

Inside a Lego man
Ever wondered if the famous Lego man had the same skeletal structure as humans? Well American Jason Freeny has shown us. He sculpted the 7.5” model and put it on show for all to see.

World's Smallest Car
Perry Watkins, a British inventor has built the world's smallest roadworthy car out of a Postman Pat children's ride and a quad-bike. It measures 101.14cm high, 66.04cm wide and 132.08cm long. The car was unveiled at Guinness World Records Day in London on November 17th. Watkins entered his car into a race with other wacky inventions including the world's fastest toilet.

Motorcycle/Toilet Hybrid
Japanese toilet maker Toto has developed a three-wheeled vehicle that looks like a toilet. It's fuelled by biogas produced from a combination of household sewage and livestock waste which is broken down and fermented. The 380kg motorcycle can run for a distance of 300km at speeds of up to 45mph.

Never Miss a Wake Up Alarm Again
A new alarm clock iPhone app has appeared in the App Store. However this is no ordinary alarm clock, this is the Brian Blessed alarm clock. There are 30 specially recorded alarms onboard to make sure you won't be hitting the snooze button. Available in the app store now for £1.99

iPhone Air Bags
Do you find your iPhone is too fragile and breaks too easily when dropped? Well Apple may be putting an end to the misery with a patent application for an 'air-bag' system that will protect your precious phone when it detects a fall. The patent sees a 'micro-inflatable' bladder being placed between the cover and the rest of the phone.

iPad has no such problem
Whilst the iPhone may need an air-bag, the iPad just needs a protective case made by G-Form. This videos shows 2 iPads being dropped from 130ft inside the cases. They performed exceptionally well and the iPads came out without a scratch.