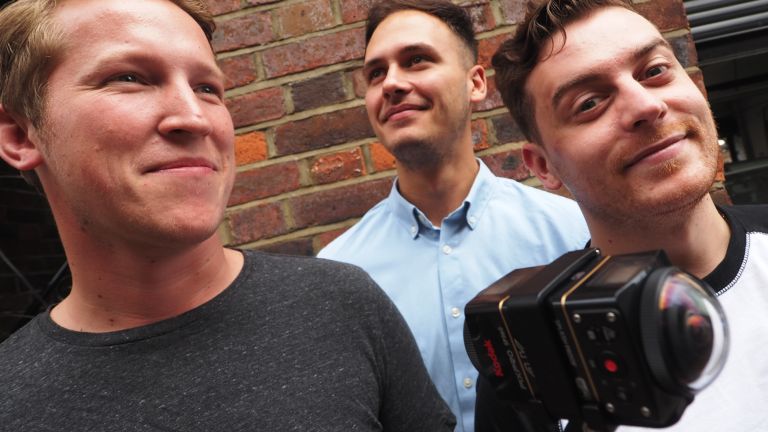 Wouldn't it be great if shooting 360-degree, 4K video was as simple as snapping a selfie? With the amazing Kodak Pixpro SP360 4K Action Cam, it is. Just ask enthusiasts Will, Dan and Charlie, who took it to London's coolest bars, pubs and rooftops to create these immersive tours. Armed with nothing more than the camera and a tripod, they created these fantastic 360-degree tours, so you can experience the bars from any angle yourself.

The Pixpro SP360 4K Action Cam specs are impressive - there's a 12MP, BSICMOS sensor, an f/2.8 lens, 4K recording at 30fps and up to 120fps high-speed recording in full HD - but what's really great is how easy it is to capture compelling footage. Our brave bar hoppers selected the best of the capital's pubs and rooftop bars, and the Pixpro SP360 4K Action Cam did the rest.

Action Cams have been a huge hit with sports fans and action addicts, who love the combination of great video and total portability - and the Pixpro SP360 4K delivers great video quality and the ability to run twin cameras for 4K fully immersive VR experience. And 360-degree video has plenty of other uses, too. It's ideal for security applications, or for creating virtual tours of properties, and it's great for videoconferencing and recording live performances. And with the companion app you can control it remotely, with your iPhone or Android acting as the viewfinder.

But there's no point having a great 360-degree camera if it can't go everywhere you do. There are no such worries with the Pixpro SP360 4K Action Cam. It has a whole bunch of accessories including waterproof housings, attachments and mounts for everything from helmets to hovering drones.

Will, Dan and Charlie visited…

The Alchemist is a celebration of molecular mixology, alchemy and craftsmanship, serving scientifically-inspired drinks in all kinds of vessels. The Alchemist has been described as 'a glint of gold amongst the charcoal and black suits of the city', and it's the perfect backdrop for any kind of social occasion.

City Social offers modern British food in gorgeous art deco-style surroundings and has truly breathtaking 24th-floor views. The best seats in the house are by the windows in the deep, curved booths, but make sure you walk around the whole venue to see its great views of the city.

The Aeronaut was aviation pioneer George Lee Temple, who was the first man to fly a plane upside down. The Aeronaut bar celebrates him in his home town of Acton, offering good, hearty grub, craft beers brewed lovingly on site and killer circus shows. There's something good going on every day of the week, and the Aeronaut has been named not just Acton's best pub, but London's best pub too.

Beach wear is welcomed, but strictly no tracksuits: this huge rooftop space has been transformed into the ultimate 80s playground, bringing the heat of Miami Beach to the heart of Brixton. The Boulevard is where you'll find a whole host of immersive performances, refreshing summer cocktails and stunning street food.

Americana doesn't get much better than this. Steam & Rye offers you the chance to sip cocktails at Grand Central Station, enjoy sumptuous, juicy burgers aboard the Eastern Pacific Steam Train or try your hand at riding an authentic Texan rodeo bull. It's a beautiful place and one of London's best party bars.

The Golden Bee's enormous drinks list is packed with martinis, margaritas, mojitos and the house special, the Golden Bee itself. But the real draw is the rooftop terrace, where films are screened on many Mondays and DJs bring the party every weekend.

The Bermondsey Arts Club is a hip speakeasy with clever cocktails - and a former public convenience. Designers Artistic Spaces have cleverly made the space feel like an early twentieth century artists' hangout, and fashion photographer turned bar director George Garnier's creative cocktail menu is something you really have to experience.

It doesn't look like much from ground level, but the Queen of Hoxton is three floors of fun with a rooftop barbecue and a range of events covering everything from DJ sets and live gigs to film clubs and a regular ukulele Hootenanny.