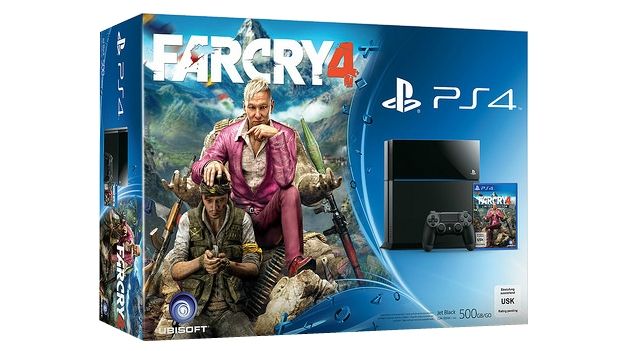 Planning to buy the new Far Cry and still yet to go next-gen? Well, Sony has a bundle right up your street.

Sony has confirmed that Far Cry 4 will be included in two console bundles when its released on November 18.

The latest instalment in the Far Cry series will be thrown in a bundle with the 500GB black and Glacier White PS4 consoles, as well as a DualShock 4 controller in each.

The only decision you'll have to make is which colour console you want, although chances are you're already eying up the super-awesome white version.

Up until now the white PS4 was only available in a bundle with Destiny, but now you've got another option.

We also announced last week that Sony is also bundling the white PS4 with DriveClub when it's released on October 8.

If somehow you don't fancy Destiny, Far Cry 4 nor DriveClub and simply want the white PS4 to flaunt to your friends, then you're in luck.

Speaking with TrustedReviews, Sony's Managing Director of PlayStation UK Fergal Gara confirmed the console will be made available as a standalone before the holiday season.

“We do have plans [to launch the white PS4 separately] and plans before Christmas,”

Gara added: “We're going to give Destiny a good, solid breathing space with exclusive claims on the white PS4 and then bring it out as a standalone product.

“We haven't quite dated that yet, but it'll be prior to Christmas.”

No price tag has been attached to the Far Cry 4 console bundles but if previous bundles are anything to go on, expect them to cost around £384.99 each.