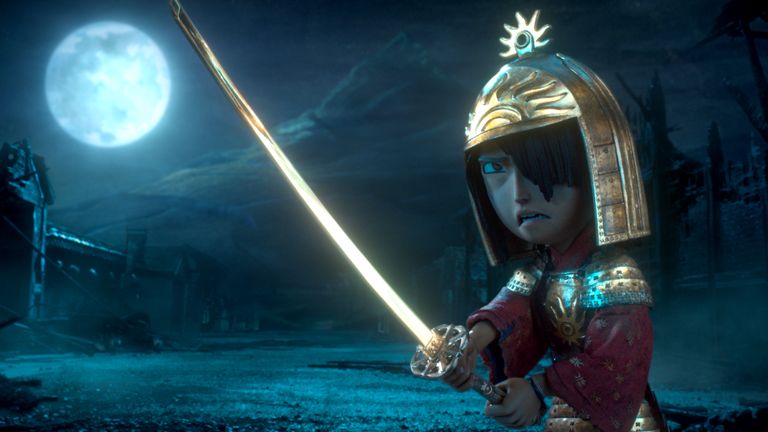 Kubo and the Two Strings releases today in UK cinemas and, as it features some of the most jaw-dropping and technically impressive visuals ever created in stop-motion animation, T3 decided to catch up with its director Travis Knight to find out just how this critically acclaimed movie got made.

What followed was a revealing glimpse into the technology and process behind state-of-the-art stop-motion animation, as well as a refreshingly frank and honest discussion about life and what it is to be human.

Before you get stuck in though, watch Kubo and the Two Strings' kick-ass launch trailers:

T3: Kubo, as with Laika's previous films, utilizes stop-motion animation - why does the studio use this and what advantages do you feel it gives the film maker?

Travis Knight: I don't know that it gives any advantages to animation really. The way I have described it in the past is that it is probably the worst possible way there is to make a film. It's incredibly slow going, it's painful, the process of making a stop-motion film is glacial. We've been working on Kubo for five years.

But I think there is something about it that I just love. I absolutely adore it. I've loved stop-motion since I was a kid when I watched the Ray Harryhausen features. I think there is something that is just so beautiful, charming, warm and human about stop-motion. It's different to any other form of filmmaking and I think that when you have real objects brought to life by the hands of an artist in real life and shot with real cameras, it has a quality that is really unlike anything else.

Also the process of creating stop-motion is different to other forms of animation. Other forms of animation are iterative, where you kind of work through something then go back and refine and change and, ultimately over time, you build a performance. Stop-motion on the other hand is like a performance art - it's progressive, you start at the beginning and work all the way through to the end and then you have something that is a work of art. You imbue something with life through the will, spirit and imagination of the animator.

T3: Can you briefly talk about a few items of technology in particular that are used to record and process the film's animation?

TK: When we started Laika a little over 10 years ago stop-motion was at a pretty significant inflection point. In the 1990s with the ascendency of the computer, the computer could do anything we could do in stop-motion better, with better precision, fine-tuned flexibility - basically there was so much the computer could do that made us question why we would even create films in this medium. I think many people did not see stop-motion as a viable way to make films and to include special effects.

So about 10 years ago we thought the writing was on the wall, that stop-motion was on life support. So we started thinking about how we can take this medium that we love that's been around for over a 100 years and bring it into a new era. The thinking was, effectively, let's embrace the author of our demise. Let's take the infernal machine which was threatening all of our livelihoods and find a way we can make peace with it and embrace it like a luddite would the loom - actually bring it into our process.

Because really the computer is just another tool, a tool like an X-ACTO blade, sculpting tool or pencil that we can just use to make art. So what we started doing at Laika was converging our craft with science and technology. And what you see on the other side of it is a very unusual way of making films. But it is one of the reasons why our films look so unique, because it is all those things blended together.

Going into a little more detail, right from the beginning we embraced stereoscopic photography, which had never been done in stop-motion before. We used laser cutters too. Also, we had digital capture systems, 3D printing systems and rapid prototyping machines - these things help give our character's life with their facial expressions and more.

These machines are just an extension of an idea called replacement animation, which is something that has been around for decades - George Pal was doing this 70 years ago when he would sculpt something out of wood or clay and have replacement things that he would shoot and bring something new to it - and it was that same basic principle that we use to make our facial animation. The key difference is that instead of having someone do it by hand, we actually did it in a computer using advanced software. From there we would send the result to the 3D printer and we could get incredible fine-tuned, flexible facial expressions. As a result, I think Kubo has some of the most refined facial animation you can find in stop-motion.

We started using laser cutters for almost everything too, such as costumes where we would create multiple fabrics and layer them on the top of each other, and then use the laser cutter to etch into them to create beautiful and intricate costume designs that you could never get if you were stitching all that stuff by hand.

We also used laser cutting to make the film's props, such as the boat we have in the film which is made out of 250,000 hand-placed leaves. That boat, while it may look a digital creation, is actually hand made. It has a steel support structure and is carved with a thin skin of wood to make it look like it is made out of origami, but then on top of that a quarter of a million leaves are placed by hand. For all those leaves we came up with a pattern and that was etched with the laser cutter.

We also have this giant monster in the film and for that we needed to come up with a way that we could manipulate it to make it move while still having it supported. So we developed this base that was controlled by a motion-control device that is effectively the same sort of device you would find in a flight simulator. It was a hexapod base that allowed us to move the monster with machines at any angle - sort of like a huge hand-operated marionette.

T3: The thing that first drew us to the film was its very distinctive and impressive art style. Who was responsible for its conception and what sources did they draw inspiration from?

TK: Ultimately the look of the film is the preserve of the production designer. We had an amazing production designer on Kubo called Nelson Lowry who I've known for over 20 years. He's a brilliant guy and with every film we want its look and setting to arise naturally with the narrative. We don't want a house style so to speak. Even though we've now made four films and you can see that there are strands of DNA that connect them all because they essentially come from the same artistic community, we also want the look of each film to be unique.

For Kubo, because of the old Japanese setting, our inspirations were kindled by classic forms of Japanese art. Origami obviously, later Edo period doll making - which inspired a lot of the faces and the look of the characters - ink wash paintings and Noh theatre. The Noh theatre influence can be seen quite heavily in the design of the sisters within the film.

Interestingly, there is a tradition in Noh theatre of supernatural creatures coming down from the heavens and taking human form, and that is exactly what happens with these characters in the film. The characters in Noh theatre also wear masks made out of cypress wood, where you can't really communicate any emotion with the face, which is kind of an analogue to what we do in animation, because all of the expression and all of the emotion comes out through the body language.

So that is what we needed to do with the sisters in the film, we'd kind of put ourselves in a corner as animators as they wear masks over their faces. In some ways though we found that liberating as it meant that every expression and every emotion has to come out of the way their bodies moved. As such, there is a balletic grace to how the sister characters move in Kubo that I love. Even when they are doing horrible vicious things they move so beautifully.

The single biggest influence visually for Kubo though was ukiyo-e, which translates as “pictures of the moving world”, and the most famous form of ukiyo-e is classical Japanese woodblock print. We wanted the film to look like a moving woodblock print and so we drew inspiration from the masters of the form such as Katsushika Hokusai.

T3: Despite its animated nature, the characters and story the film uses are, arguably, quite complex and grey. Tonally do you feel animated films such as Kubo have more scope to explore these concepts?

TK: I think we want to tell dynamic and rich stories. Rich dynamism in films can create great experiences for the audience so I think it is kind of an artful balance of lightness and dark, intensity and warmth. I truly believe that by spending a bit of time in the shadows, it makes the light that much brighter, warmer and more beautiful. I think you can't really appreciate joy without having the antithetical emotional response and so in our films we try to have that up and down, that dynamism.

As such, there is intensity in this film and we do explore some heavy issues, indeed we embrace the fact that a fundamental part of life is death, and that loss is a fundamental part of being human, but we also explore the healing that comes out of these experiences. Fundamentally though, there is joy in the film, a celebration of humanity, even with all its flaws there is beauty. It's about forgiveness, it's about compassion and it's about empathy - but to get there we make sure we take the audience on a ride.

T3: Thank you very much for talking to T3.

TK: No, thank you. It was a pleasure.

Kubo and the Two Strings is out today in UK cinemas. For more information about the film then check out the movie's official website.