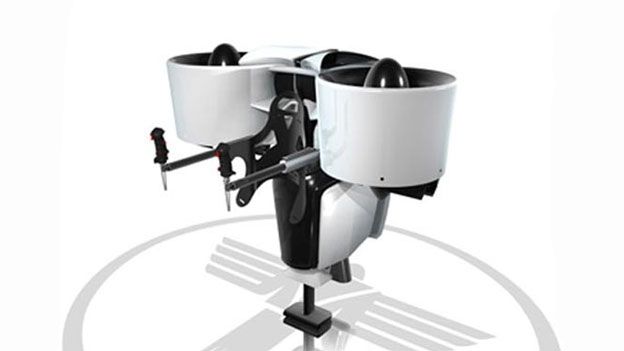 A working jetpack has been unveiled at a defence exhibition in Dubai, which is capable of flying at 62mph up to one mile above the ground

It's the future now. We have touchscreen phones, huge hard-drives the size of a pack of cigarettes and - most unbelievably of all - TV shows we can watch anywhere in the world on day one release! We don't have flying cars yet, but hopefully someone's working on that.

What we may also have soon is a jetpack. A real-live working jetpack. like the one shown in the video below.

Unveiled at a defence exhibition in Dubai, this jetpack allows whoever's wearing it to fly up to a mile above the ground at 62mph. Its powered by two gigantic twin-ducted fans that produce the required thrust to lift a single person vertically off the ground and gift them sustained flight. Technically, we suppose that makes it a 'fanpack' rather than a jetpack, but we'll stick with what the manufacterer is calling it.

Developed by California-based Martin Aircraft Company Limited, the device weighs a hefty 140kgs and runs on petrol.While there's obviously significant interest in the device from military outfits, Martin Aircraft says it could also be used by emergency services and even for leisure. Anyone who fancies flying about their neighbourhood, though, should expect to pay a pretty penny for the privilege; the jetpack costs an eye-watering £66,000 per unit.