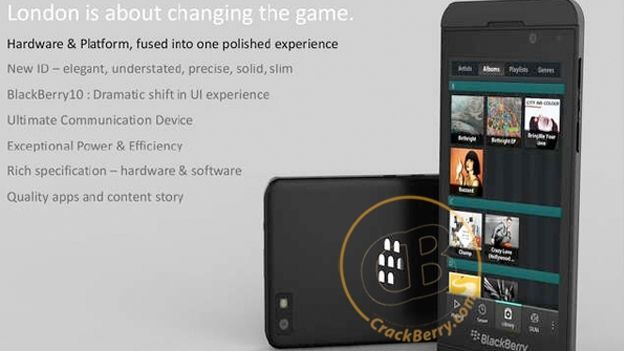 Set to launch the upcoming BlackBerry 10 operating system the previously leaked BlackBerry London handset has made another premature venture into the wild with marketing materials for the as yet unannounced handset hitting the web.

With the BlackBerry 10 OS expected to make an arrival at BlackBerry World in May the repeatedly leaked BlackBerry London handset is expected to be the UK's first flagship model sporting the software formally branded as BB OS 10.

Whilst the two leaked images of the claimed BlackBerry London handset show devices with considerably modified form factors, the latest offering shows a drastic move away from the now customary BlackBerry design with the handset taking on a full touchscreen, almost iPhone-esque design.

On the software side of things BlackBerry 10 is set to be a major move from the current BB offerings with a “dramatic shift in UI experience” touted alongside improved app offerings.

Of course one of the major changes will be the promise by BlackBerry that future handsets with the new OS will be compatible to run Android Apps essentially opening up BlackBerry to hundreds of thousands of apps.

Whilst there is currently only rumour surround the BlackBerry London's specs the handset manufacturer's parent company RIM is believed to be trialling TI OMAP5 and Qualcomm processors both of which are said to be 1.5GHz dual-core offerings.

Elsewhere the smartphone is touted to have 1GB of RAM and 16GB of internal storage and looks set to be a step away from the current range of BlackBerry devices and a move into the high-end smartphone sector. A 2-megapixel forward-facing camera is also set to appear alongside an unknown snapper on the rear.

Doing away with the brands much-loved and now synonymous full QWERTY keyboard the BlackBerry London is said to boast a 3.7-inch touchscreen display book ended by metal endplates and line up slimmer than the minimalist Apple iPhone 4S.

After the announcement from BlackBerry and RIM that there would be no BlackBerry 10 handsets till the end of 2012 it looks as though we'll have to wait a while and with the BlackBerry London not officially confirmed we could be looking at a wait of at least six months.

Can BlackBerry switch its dwindling fortunes with the upcoming BlackBerry 10 operating system? Let us know what you think via the comments box below.