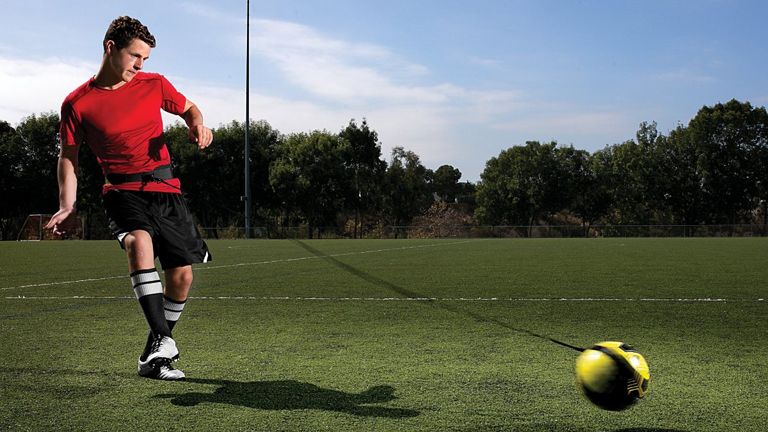 From £4 phone apps to state-of-the-art nets fit for a Premiership player's manicured garden, here are our pick of gadgets to make you better at the game of foot the ball.

Adidas' miCoach smart ball connects to an iPhone app via Bluetooth, providing expert tips on your kicking technique to help you bend it like Beckham or nail tricks worthy of Ronaldinho.

The ball has integrated sensors to detect how hard it's been kicked and in what direction, as well as a hidden battery that's charged when it's placed on a dock.

The app seeks to improve your skills with tutorials and record moments of brilliance that can be tracked over time and shared on social media – which has got to be more fun than kicking a standard ball against a wall.

If you want to manage your Saturday morning team like a pro, the Coach's Eye app could be for you.

Available on the iPhone, or alternatively as a service connecting different cameras and devices, it records players movements and lets you play them back in slow-mo, annotate them and even provide a commentary as if you were on Match of the Day.

It works with mobiles and cameras the team already has to avoid forking out for extra equipment, with premium versions allowing players to upload their own videos to get their coach's feedback between training sessions.

While you may practise your passes against a wall, professionals use springy 'rebound' nets that pass the ball back perfectly – high, fast, flat or soft - so they can hone their technique.

The m-station Talent rebounder, used by the likes of Real Madrid and Manchester United, is a pricey garden toy with space for your phone so the MuninPlay app can record the accuracy of your passes and chart your progress, even competing with friends.

It's claimed that with practice, the rebounder can help you score more goals than before and even the most difficult of finishes will become part of your repertoire.

As goalie, you're the last line of defence and a good pair of gloves can snatch victory from the jaws of defeat.

Adidas' Ace Ultimate Goalkeeper Gloves have a 'maximised contact areas in all catching motions,' an 'engineered palm' to fit the hand, and different zones with grips to allow players to catch the ball with confidence.

They also boast FINGERSAVE technology, which acts like an airbag for your fingers, by stiffening upon impact to protect your digits as well as maximising ball deflection.

Think you can out-run Manchester United's Antonio Valencia at 35.1km/h (21.8mph)? Playertek's GPS tracker for footballers analyses your every move and allows you to compare your performance to that of your favourite players, such as Messi, Rooney and Ronaldo.

A 'pod' packed with sensors clips onto a base layer vest, to measure everything from speed to the power of your kicks, and sends this data to an accompanying app.

It reviews your game in five minute chunks, creates a heatmap showing where you are most effective (or lazy) on the pitch, and can even track your performance across a season like a proud parent. The only thing it doesn't do is cheer you on from the sidelines.

You can't always play the beautiful game in beautiful weather conditions, but Nike's Anti-Clog Traction technology for boots is designed to stop you slipping in the mud so you can run faster.

The soles of three special edition boots – the Tiempo, Magista and Hypervenom - are coated with a lubricating layer that stops mud sticking to the boots when they get wet.

As well as better performance on the pitch, there will be no mud to clean off the studs afterwards, giving you more time to tackle and one less chore when you get home.

Football practice doesn't have to stop when the sun goes down. The Tangle Sport Matrix Airless NightBall Soccer Ball contains LED lights that illuminate it when it moves, making it perfect for practising keepie-uppies in the evening.

While there are lots of light-up footballs on the market, this one doesn't need to be inflated, so you can leave it in the car for an opportunistic kick-about on the beach.

The LEDS are designed to last 40-59 hours, or 150,000 pulses on one battery and the harder it's kicked and faster it rolls, the more the ball glows.

And, while we're talking about football practice, this SKLZ Star Kick Football Training Aid offers a cheap and cheerful way to train when on your own.

The device works with the user donning a neoprene waistband, to which is attached a six foot elastic cord that stretches to over 18 feet. At the far end of the cord sits a neoprene glove, into which a football may be secured.

The result? You've got a football that automatically returns to you no matter how hard you kick it, with the elastic cord stretching and then contracting to return the ball to the user's feet. This is great for maximising the number of touches on the ball during training, with no time lost in fetching the ball from over the neighbour's garden fence.

If you constantly stop to tie your laces up to the annoyance of your teammates, Adidas has a boot for you. Its Mercury Pack 'chrome' boots have a protective sock over the pesky ties so you'll never hold up play again.

The three designs – X16+PURECHAOS, MESSI 16+ PUREAGILITY and ACE 16+ PURECONTROL will be worn by Leo Messi, Paul Pogba and Gareth Bale during Euro 2016.

While they may not give you the players' enviable skills or salaries, Adidas claims its PURECUT SOCK SYSTEM, which covers the laces, boosts aerodynamics and your performance.

The X16 PURECHAOS boots are built for speed and are one of the lightest ever made, while the MESSI 16+ also have a heel lining for improved fit and 'moments of inspiration'.