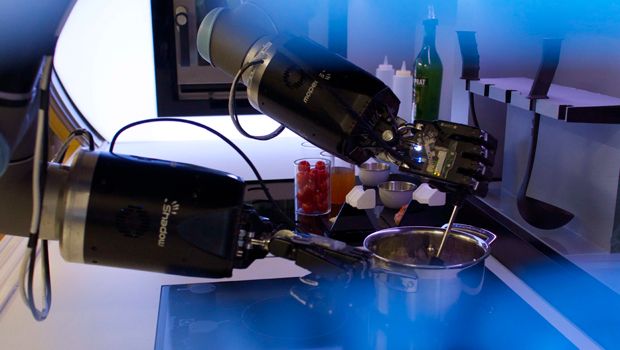 Most kitchen gadgets add a cool feature that makes cooking slightly more pleasurable. But this one takes care of everything. It's the world's first automated kitchen, and should mean even the beans on toast brigade can knock up something worthy of a MasterChef final.

It's made by Moley Robotics, and features a dexterous pair of robot arms with fully articulated hands. A video shows them stirring a pot, and even adding wine to the stew as it cooks. Let's hope it offers decent measures.

The hands are made by the Shadow Robot Company, whose products are used by NASA and in the nuclear industry. They're said to faithfully reproduce the movements of a human hand.

Tim Anderson, who won MasterChef in 2011, had a (human) hand in developing the machine.

He was motion captured, the way actors are when they appear in video games. Except instead of kicking ass or delivery stilted dialogue, he was cooking a crab bisque. The actions were translated into digital movement using bespoke algorithms for the robot to mimic.

This isn't pie in the sky. Moley Robotics, which is based in the UK, aims to have a consumer-ready version on sale in a couple of years. This will be smaller than the concept version, and will have a built-in fridge and dishwasher to go with the hob and oven.

With chefs professional and amateur alike uploading their recipes, the goal is to have an iTunes-style library of recipes ready to be downloaded and made in minutes. Meanwhile you can put your feet up.

The closest we've seen is Meld, which hit Kickstarter recently. But a fully robotic kitchen could change how we cook forever. If it works. And that's a big if.

Read more: Check out the best coffee makers you can buy right now