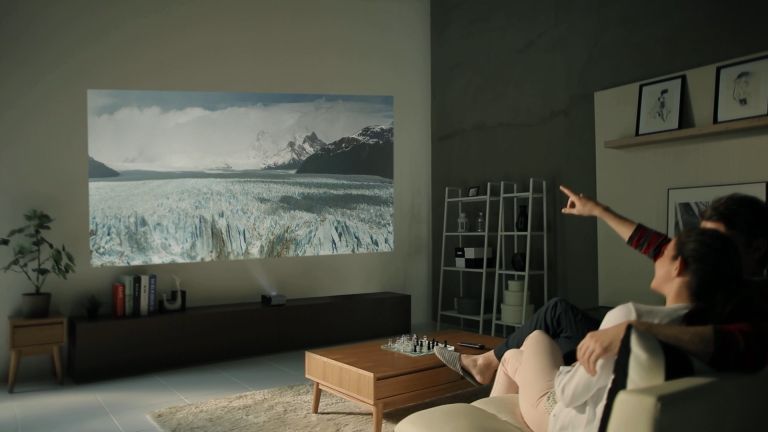 There are easy to place short throw projectors and then there's the LG Minbeam PH450U and PH150G battery powered LED projectors that turn pretty much any flat surface into a screen.

Thanks to the ultra short throw credentials of these projectors they can be placed just 13-inches from a flat surface to chuck an image up there. This, combined with battery power, should mean you can easily move between rooms or even outside to watch on a huge 80-inch display.

The LG PH450U is the larger of the two units with an LED lamp that can chuck out up to 450 lumens of brightness at 100,000:1 contrast. Being this bright the battery will be all used up in just two and a half hours. But this is the point - that's just right for watching most films and means the best quality even if for a limited time. Don't expect to watch in daylight but that should be bright enough to handle most shaded rooms in daytime.

The LG PH150G is far smaller and more mobile at 450g which means a loss of light where this unit tops out at 130 lumens.

Both projectors come with Wi-Fi and Bluetooth for wire free connections making playing near anything simple. The downside? They both top out at a 1280 x 720 resolution - still HD but a far cry from 4K.