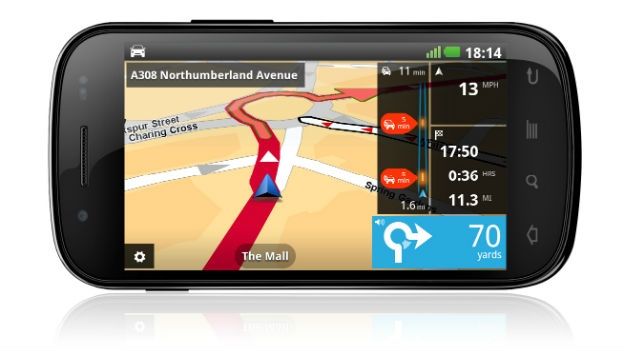 Although we got a glimpse of the TomTom Navigation app back at IFA last month, its now fully available to own on Android, having been around for some time as a downloadable app on Apple's iOS devices.

Unfortunately, that announcement seems to be overshadowed somewhat by a revelation that the app doesn't work with top devices like the Samsung Galaxy S3, HTC One X or the Google Nexus 7 tablet.

The latest maps are included on the app and stored offline, so you won't lose your navigation even if you drop signal during the journey. Or suffer the wrath of the roaming data charge.

But, that's a bit of a moot point if you're one of the many HTC or Samsung users unable to use the app. According to TomTom, the Navigation app works with any device running Android 2.2 or higher and with an 800 x 480 or greater resolution.

The TomTom Navigation Android app is designed primarily for drivers and offers quarterly updates to ensure your smartphone is kept stocked with the latest maps.

Mapping applications have taken centre stage recently with the recent Apple Maps fiasco and the rumours of Google bringing Street View to its mobile app. It seems TomTom's incompatibility is the latest chapter in the saga.

“Today, we are bringing this world-class navigation experience to millions of Android smartphone users for the first time.”

We should mention though, this isn't your typical 69p download. The TomTom Android app is available at a special introductory price of £30.99 for the UK/Ireland map and £39.99 for Western Europe.

There are plenty of features thrown in as well: HD Traffic gives you live traffic updates and real-time speed camera alerts come in handy when you're going a little faster than is strictly necessary.

If you're device is compatible with the app then you're still going to need 3.7GB of free storage space to complete the download.

Have you used the TomTom Navigation app or are you unable to download it? What are your thoughts? Let us know in the comment box below.