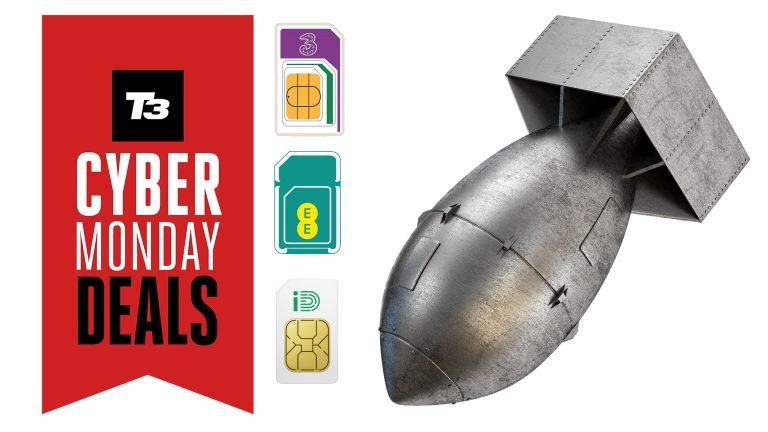 We've already seen some great SIM only deals but this megaton detonation of five absolutely fantastic SIMO Cyber Monday deals from a variety of the UK's top mobile networks is an absolute must-see for anyone currently in the market for a new SIM plan.

That's because there is, literally, a Cyber Monday SIM only deal for everyone below. From bargain plans that cost only £5 per month, to Goldilocks zone "just right" deals, and onto mega data or unlimited everything offers, these are without doubt the only SIM only deals that matter.

Indeed, with some of these deals even offering 30-day, cancel at any time contracts, the market really is in SIM only deal wonderland. The idea of such generous allowances with not long-term contract is borderline SIMO heresy.

The full details of each SIM only deal can be viewed below.

SIM only | 2.25GB data | 250 minutes | Unlimited texts | £5 per month | 30-day contract | Available now at iD Mobile
For light to medium users this stupendously cheap SIM only deal from iD Mobile is a Cyber Monday cert. £5 is less than a single pint of beer in many pubs, so the fact you can get 2.25GB of data, 250 minutes and unlimited texts each month for it is crazy really. The cherry on top? A 30-day rolling contract, meaning you can cancel at any time.

SIM only | 60GB data | Unlimited calls and texts | £20 per month | 18-month contract | Available now at EE
EE has the fastest mobile network in the UK, and you can tap into its hyper-fast speeds with this excellent SIMO deal. It slots 60GB of data into your phone each month, along with unlimited calls and texts for just £20. Cyber Monday just got won for fans of rapid, data-stuffed SIM plans.
View Deal

SIM only | 100GB data | Unlimited calls and texts | £17 per month | 30-day contract | Available now at Smarty
Another banging, big-data SIM only deal, this super Smarty SIMO delivers a gargantuan 100GB of data to burn through each month, as well as unlimited minutes and calls for just £17. The fact that it comes on a cancel at any time 30-day rolling contract is almost too good to be true. A Cyber Monday steal.
View Deal

SIM only | 12GB data | Unlimited calls and texts | £10 a month 12-month contract | Available now at Three
If you don't need massive data, but do like the idea of unlimited minutes and calls each month, then this "just right" Cyber Monday SIM only deal should appeal massively. You get 12GB of data each month, as well as unlimited yacking and tapping for just a tenner each month. Thanks Cyber Monday!View Deal

For even more incredible SIM only (SIMO) deals be sure to consult T3's authoritative price comparison chart below. For even more great Cyber Monday deals, be sure to check out your favorite retailer's top offerings, too.