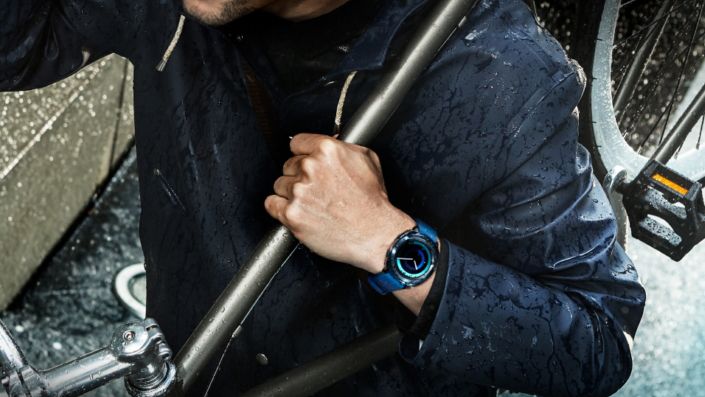 First up, let's take a look at the Gear Sport. To us, it looks like a sporty Omega Bullhead, it's quite a distinctive thing.

The focus here is on fitness, it'll help you achieve health and wellness goals, provide nutrition management alerts, and help you to be generally more active.

It features a circular bezel (like the Gear S3) and AMOLED 1.2-inch display.

It's designed with military-level durability, it can handle a wide-range of environments.

It also features easily changeable 20mm straps, so can easily transition from the gym to the board room to dinner.

It'll be able to control your smart home devices, and it also features NFC and Samsung Pay.

Next up is the Gear Fit2 Pro, a GPS-packing fitness band. Samsung's band now features heart rate monitoring and well as swim tracking (powered by Speedo).

There are also apps, like Spotify and Under Armour, to make this a bit more powerful, and potentially more useful than a Fitbit.

It's available in black and red.

And finally, we've got the IconX, a second generation of Samsung's cord-free earbuds.

Not only do they play music, they'll track your work out too, working completely independently from your smartphone.

These new buds come with Bixby built right in, allowing you to talk with Samsung's virtual assistant with a simple tap of the button.

The IconX come in black, pink, and white.