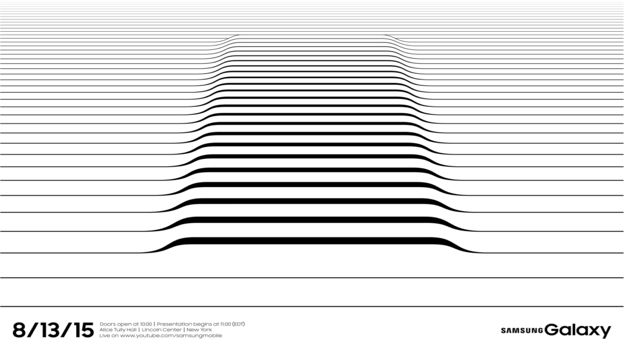 Samsung's next big launch is on the way after details of its Galaxy Unpacked 2015 seeped out through the company's blog.

The event takes place on August 13th at New York City's Alice Tully Hall at 11:00 local time with doors in the Lincoln Center facility being flung open an hour earlier. It's widely expected that the event will see Samsung launch not one but two devices.

Headlining the launch is the fifth incarnation of Samsung's popular phablet, the Galaxy Note 5, which will attempt to steal some of Apple's thunder by launching over a month before the expected outing of the Apple iPhone 6S in September.

Joining the Galaxy Note 5 on the stage will be the Galaxy S6 Edge+ that is rumoured to build on the S6 Edge with a larger 5.7-inch to accompany the curved edges that Samsung brought to the table on the original S6 Edge. Further to this it's likely to possess one of Samsung's own octa-core Exynos 7420 chipsets with little else about the device so far revealed.

The Wall Street Journal is also reporting that Samsung will be launching a new smartwatch - maybe the long rumoured Galaxy A - at the event as well as a limited version of Samsung Pay.

It seems Samsung may be pushing through the contactless payment system a little earlier than expected in an attempt to compete with Apple Pay.

Samsung fans that want to see the launch will be able to tune in through the Samsung Tomorrow blog or via the Samsung Mobile YouTube channel. Don't forget to check out our Note 5 hub for all the latest.