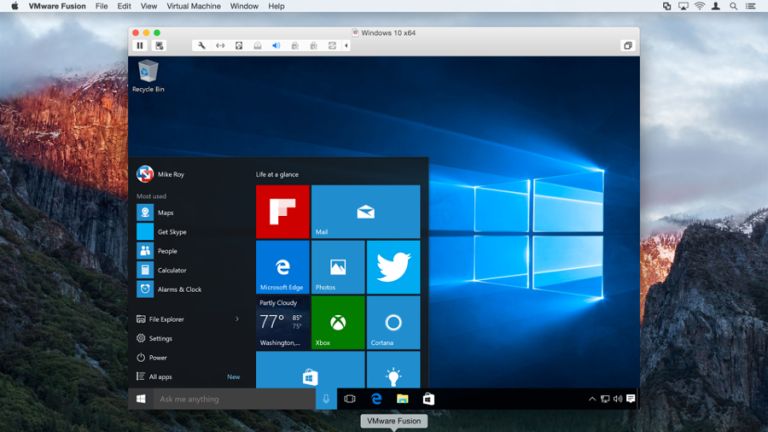 VMware has released a new version of its Fusion software for the Mac, which allows users to run other operating systems inside a virtual machine, and it fully supports Windows 10.

VMware Fusion 8 boasts over 50 new features in total, including the ability to run Windows 10 on your Mac without rebooting. It also takes advantage of Cortana, Microsoft's digital assistant, which works when Fusion is running in the background.

Version 8 also supports El Capitan on the Mac. If you've yet to take the plunge with the public beta, you can use Fusion to test out the next incarnation of OS X in a virtual machine, pottering about and seeing what it's like at your leisure.

The new program also introduces support for DirectX 10 and OpenGL 3.3, and its maker claims that Fusion 8 is 65% faster in terms of graphics performance compared to the previous version.

Fusion 8 has also been tweaked to perform well on the latest Macs and ensures efficient battery usage on Apple laptops. That includes Adaptive graphics switching, which allows dedicated GPUs to power down to conserve battery life while integrated ones kick in.

There's also a new Pro version of the package that adds another 10 or so features on top of the basic Fusion 8 offering, including integration with VMware vCloud Air, which allows for secure cloud-based backup of virtual machines on the local Mac, among other tricks for professional users.

VMware Fusion 8 is now available worldwide and will set you back £62 when ordered from the company's online store, or you can upgrade from version 6 or 7 for £39 (note that if you bought Fusion 7 very recently – since July 29 – you're eligible for a free upgrade).