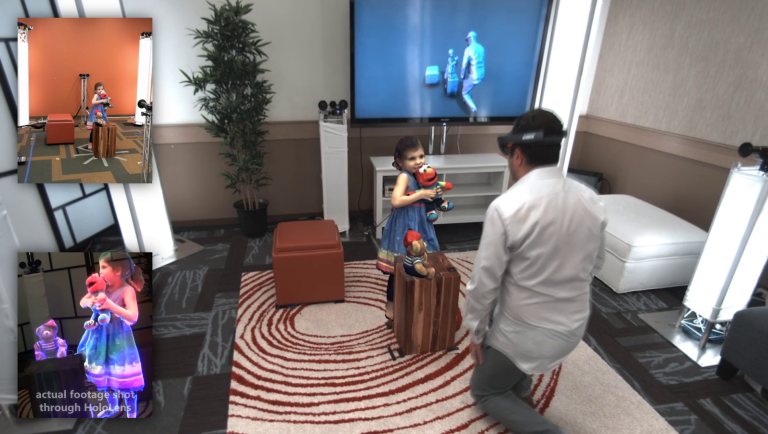 It looks like Microsoft's augmented reality tech HoloLens is going to be capable of some pretty remarkable stuff. We're promised films that will follow you around the room and a version of Minecraft specifically built for block creation in AR/VR, and it looks like the platform is getting another exciting addition - holographic communication.

Entitled 'Holoportation', the concept uses a set of 3D cameras set up in a stable environment which capture the physical image of a caller from every angle. This data is then used to create a 3D render of said individual which is subsequently sent direct to the headset of the recipient. The idea being that this avatar will move and talk in sync with the caller. Since its augmented reality, you can have said calls with a bespoke background - business call on the surface of Mars anyone?

The Microsoft Research lab actually showed off the tech last June, but this is the first time we've seen footage of the newly named Holoportation in action. It's not just live video feeds that are available either - Microsoft even used the setup to record footage, which was then shrunk down to play on a coffee table. It's a pretty neat idea, but clearly a very expensive one at this stage (especially when you consider the headset alone will set you back a cool $3,000 for a dev kit version).

Why not check out: Some people can now pre-order the dev version of Microsoft HoloLens