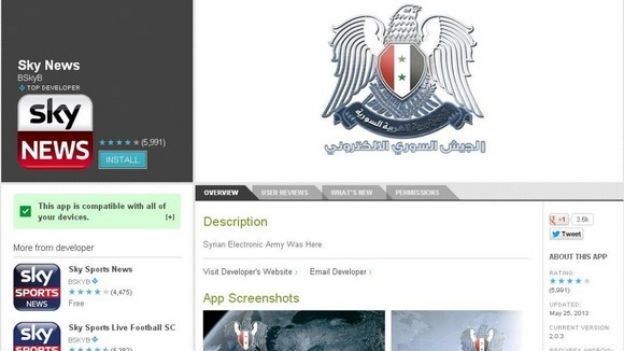 BSkyB have had their Sky+ and SkyNews Android apps compromised, and the Sky Help's Team Twitter account.

Following the hack, a note was left on the Android app pages on Google Play stating, "Syrian Electronic Army Was Here."

These were all then confirmed by a hacker with the Syrian Electronic Army (SEA), The Desk reports.

A tweet sent out from @SkyHelpTeam, urging customers to uninstall their apps was not made by Sky.

Update: Sky have now issued the following statement, "Sky Android apps previously downloaded by Sky customers are unaffected and there is no need to remove them from their Android devices."

The attacks prompted an e-mail concerning security from Twitter that informed media companies to implement better security in order to protect their accounts.

Earlier this month, Syria was cut off from the internet. President Bashar al-Assad blamed the outage on "terrorists" but it was unsure whether the government had a part to play.

The affected Android apps have now been removed from Google Play.