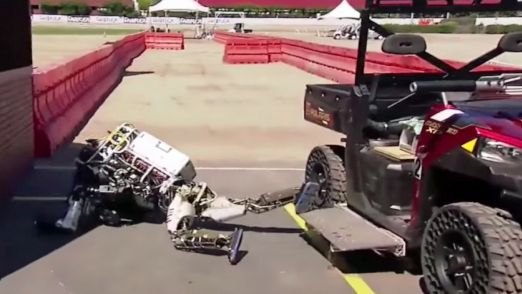 Robots taking over the world? They may be gettingmore aggressive and, in many ways, more impressive… But still, maybe not any time soon. For while droids maytall the talk,they can't walk the walk, if this year's Darpa Robotic Challenge (DRC) is anything to go by.

This year's contest was launched in response to the nuclear disaster in Fukashima, Japan in 2011. The purpose of the competition was to built a 'bot that could walk into a disaster zone that would be too dangerous for humans. Currently the Fukashima power plant is still too radioactive for people to enter in order to make it safe.

Among the tasks the robots faced were driving alone, walking through rubble, tripping circuit breakers, turning valves and climbing stairs.A dozen teams from the United States and another 11 from Japan, Germany, Italy, Republic of Korea and Hong Kong competed in the outdoor competition.

However, although robot tech is advancing at a rate that some find frightening, there were certain tasks at the DARPA challenge that a small child could handle, yet which foxed some of the competitors. In fact, a Youtube video of robo-bloopersmakes a lot of the droids look like they've been out on the lash the night before.

Quite a few of the robotic challengers seem to struggle with walking, and one also notably fails to gracefully exit a car.

That said, the competition was a serious one with a first prize of $2 million going to Team Kaist from Daejeon, South Korea and its robot, DRC-Hubo. Presumably, this robot was the one devious enough to spike the drinks of its rivals.

There's more about this over at IEEE Spectrum